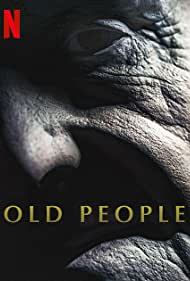 I always am looking for newer horror movies that are interesting and bring something new to the game. When this German production showed up on Netflix, I decided to check it out. While the results are mixed, I’m glad that I did.

The movie begins with a young woman arriving at a large apartment complex during a rainstorm. She is talking to her boyfriend/husband on the phone and lets him know she has arrived and needs to get to her job. From the outside markings on her car, she is involved in elder care. The apartment door is open, so she lets herself in and after some creeping around the old man who lives there smashes her head in with his oxygen tank. Okay… you have my attention.

A voiceover lets us know that what we are about to watch, the main story, happened earlier or at least the same night as what we just saw. A woman is taking her children, a teen girl and her younger brother, home for a wedding. When she arrives, she has to pick her father up from a rest home, which is complicated by her ex-husbands new wife or girlfriend working there. Then the wedding happens but at the same time the elderly get a homicidal rage in them that is directed towards the young. I suppose they are feeling abandoned by a world that has moved on and decided to house them in awful conditions. They never explain if this is a biological or some supernatural affliction, it just happens. The remainder of the proceedings are the survivors trying to escape the violence. 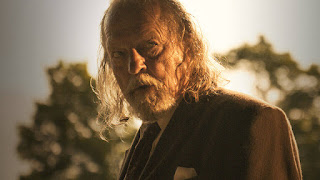 I don’t want to go into the plot any further as that might spoil things. There are some surprises as to who lives and who dies. Be warned that this is the kind of movie that is trying to kick your ass and make you feel things and at times it is successful in doing that. There are characters that are very likeable that have terrible things happen to them. This includes some of the elderly who are the killers. One of the most disturbing parts of the movie happen before the violence kicks in when we get a look at the home where they are forced to live. Woefully understaffed the residents are strapped to beds to protect them from wandering. They lie there in their own filth waiting for someone to take care of them. There is also a heartbreaking bit with a resident who thinks that our main character is his daughter, which is revisited in a soul crushing bit later on. If you notice closely many of them are just confused and not necessarily violent, but you never know who is and who isn’t.

Old People got under my skin. But here is where I felt a bit let down. They sort of hint at an underlying motivation of them being abandoned by their families as a reason for what happens. Whether that is a supernatural force, or a virus doesn’t matter. This is a powerful message about aging that I wish the filmmakers had spent more time developing. Instead at some point it feels like our killers just become a stand in for zombies or infected turning this into a by the numbers horror flick. I think it lost something of what made it interesting when that happens. 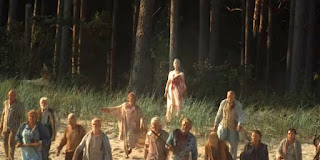 The above comment doesn’t mean that the horror elements don’t work. They do. The kills are mostly offscreen but in a very old school way that is fine. They are staged in a manner that lets your mind fill in what is happening, which is far worse than what they could have shot. This is further reinforced with some sound effects and after the fact shots of the bodies. There are stabbings, the oxygen bottle to the face, and some heads getting bashed in. Also, the violence is done in a realistic disturbing manner. People don’t get stabbed and die, they scream, gurgle, and beg/fight for their lives. I did mention already that this movie is disturbing, didn’t I?

Old People isn’t a fun horror movie and might not be for everyone. I also must restate that I think they missed out not going more into the motivation or at least the social commentary on how society treats the elderly. But the movie is still a very effective kick in the butt horror experience and that makes it worth checking out.

Posted by Gutmunchers Lives at 5:09 PM