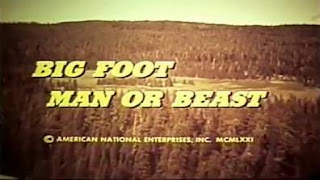 Time for another bit of seventies fun with this Bigfoot documentary. This is an earlier entry into that unique cryptid fascination that caught me up when I was a kid, I’ve never actually watched Bigfoot: Man or Beast before. Thanks to a good friend who hooked me up with a copy on VHS I get to fill in that gap.

There isn’t a narrative, well sort of maybe, I guess. After starting off with about half an hour of people talking about their experiences and encounters with the legendary Sasquatch, we then spend the remaining hour or so with a researcher named Robert W. Morgan. He serves as both the host and narrator. He is leading a team into the woods doing some research. This leads to a lot of him talking about theories and where they may look. There is some drama with a forest fire that forces them to abandon all their hard work, but it is mostly stock footage of nature and trees burning.

This second bit seemed awfully familiar, but I know that I hadn’t seen this before. Then after a bit of poking around I found that a lot of the Morgan stuff had been edited into the In Search of Bigfoot a few years after this came out. Even the release date for Bigfoot: Man or Beast? is a mystery. It seems to have gotten a very limited release in seventy-two but got a wider release in seventy-five, which explains the copyright mark from that year. That means it was only a year before being reused for In Search of Bigfoot.  These drive-in guys knew how to hustle and get the most out of what they paid for, that is sure.

Now that I’ve given you a bit of background and explanation, I suppose I should hop into reviewing the movie. You should know that I’m a huge nerd for this sort of flick, having been caught up in the excitement of it all when I was a kid growing up in the seventies. I’m one of the few people you will meet that sings the praises of Ivan Marx’s The Legend of Bigfoot, which is honestly a nature documentary with a guy talking about Bigfoot as they go along. Not a thrilling movie for sure, but I dig it.

Maybe it is the lack of nostalgia since I’ve only just seen this one, but it was really boring. The pacing is terrible with long stretches of a narrator droning along with seemingly unreleated footage rolling in the background. The encounters are basically people sitting on couches talking about what happened to them instead of the cheesy fun reenactments from something like The Mysterious Monsters or Legend of Boggy Creek. I’ve heard all of these stories before and some of them are very creepy, but they manage to suck all the energy out of them with how the filmmakers present the tales here.

We get all the classic tropes of the Bigfoot documentary like tracks, the Patterson Gimlin film, and the crippled foot proving that no one could fake a particular set of tracks. If that sounds familiar it is because many of the same faces that are in this movie as experts also appear using the same basic material in the much superior The Mysterious Monsters. Guys like John Green, Robert Morgan, and Grover Krantz all show up in both. Watching this movie made me want to watch that one instead. Not a great sign.

I’m glad that I’ve finally watched Bigfoot: Man or Beast? and am able to scratch it off my list. But I won’t be going back to this one as there are much better options. If you haven’t seen any of them, please pick one of the other movies I’ve mentioned in this review. On the other hand, if you are a veteran of Sasquatch documentaries then maybe you will get something out of checking this one out. Just keep expectations low.

Posted by Gutmunchers Lives at 3:40 PM