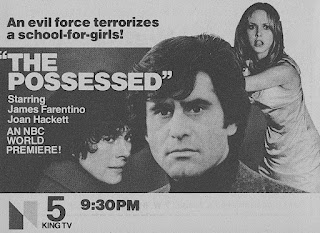 I’ve said it here on the site before and I will continue to shout it from the rooftops. There was no decade quite like the seventies when it came to made for television movies. The networks had their own cottage industry making tame versions of the most popular pop culture subjects for the airwaves. With the popularity of movies like The Exorcist and The Omen the whole Satan and demonic possession thing was ripe for the picking. That is how we ended up with The Possessed.

Things kick off with a minister named Leahy. He is dipping into the communion wine which leads to a terrible car accident and a near death experience. It seems that he had lost his faith, was an alcoholic, and an adulterer. God sends him back to Earth for redemption by seeking out and fighting evil. So, Leahy isn’t a preacher anymore but is now an exorcist who goes looking for the devil. Got that?

The movie then continues with some strange occurrences at a girl’s school run by headmistress Louise and her teacher sister Ellen. Ellen’s daughter Weezie is also a student at the school. After some foolish shenanigans from the girls, we see fires start to pop up on campus. One of them horrifically burns the legs of the valedictorian causing Ellen to go looking for help. When she is ignored by the police and her theories dismissed as foolish someone puts her in touch with Leahy. He shows up and starts to do some digging but can make her no guarantees that he will be able to stop it. Later we find out that person who was going to tell him about what was going on is still trying to locate Leahy, so how did he know to come to campus? This is the first of many mysteries that must be solved as it is unclear who has brought the evil to their school and what it wants. Not to worry eventually all is explained… sort of.

I enjoyed the heck out of this one. Due to limitations of what they could show or even insinuate the filmmakers had to be creative. This leads to the movie playing more like a who done it as they lean heavily into the mystery of who is possessed rather than the horrific elements of the deaths and fires. They double down by making the Leahy character sort of appear and disappear at will. I mean not literally, but figuratively as he seems to show up ask pointed questions and then fixes things. It begs the question as to whether he is alive or some supernatural force for good. Having thought about the opening they don’t explicitly say he survived. Just a fun thought. Clocking in at an hour and sixteen minutes these questions kept me engaged and interested from start to finish. This is the case even after it is revealed who the culprit is. That ending is killer with I think Leahy taking the evil with him off campus as he disappears and the person who was possessed seemingly back to normal. The fact that they don’t explain why she was or how he helped her only adds to the mystery and the fun.

As much as I dug the story, I will admit that this movie is more well known for the actors that are in it than the quality of the plot. You have James Farentino as Leahy, Ann Dusenberry as the daughter Weezie, Eugene Roche as the police sergeant Taplinger, and Joan Hackett as the school mistress Louise. While these names might not jump off the page at you, I promise if you watched any genre or television from the seventies and eighties you will recognize these folks. These are working actors that appeared all over the place. But there are a pair of supporting roles that grab everyone’s attention.

First up is Harrison Ford as the slightly creepy Biology teacher Paul Winjam. The Possessed aired a couple of months before a little science fiction flick you may have heard of called Star Wars hit the big screens. This was the last thing he did before his career took off and for some reason, he is featured prominently in most of the DVD covers and ads for this movie, despite having a small supporting role. The other is P.J. Soles as one of the schoolgirls. She has an even smaller role but is totally great in this. See what I did there? In another fun connection to Carpenter’s Halloween Ann Dusenberry was up for the role of Lori Strode before Jamie Lee Curtis got the part. I do love a good “What if” don’t you?

As of the writing of this review you can find The Possessed on YouTube for free. It is well worth you time to check it out. Not only for the fun before they were famous appearances but because it is a good time. I highly recommend it.

Posted by Gutmunchers Lives at 9:53 AM