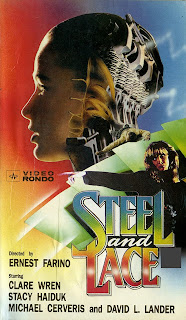 This movie starts off in a courtroom with a rich boy on trial for raping a concert pianist named Gaily. His boys cover for him and with their testimony he is found not guilty. Though we see in a flashback that he and his friends are most certainly guilty of the horrible crime. In the chaos after the verdict Gaily is chased to the room of the courthouse and to the horror of her brother, Albert, jumps to her death.

The action moves to five years later and we see that Daniel, the scumbag who raped her, and his friends are now real estate tycoons forcing old folks out of their homes. After intimidating their latest victim, they all take off in different cars when one of them breaks down. He is picked up by a hottie who takes him to a no tell motel that rents the rooms by the hour. The action he gets isn’t what he expected though, which is when we meet Dunn the cop. He is investigating the murder and then the other murders as someone is tearing thru Daniel’s friends. Dunn, with the help of his artist girlfriend Alison eventually figures out that Albert is getting revenge for his sister’s death. And since he is a scientist, he has built a robotic version of her that is going all terminator on their collective asses!

This is a fun bit of early nineties low budget filmmaking that is way better than it should be. The story is predictable but paced quickly and pays off the revenge storyline in a satisfying way. The bad guys are cardboard cutouts, especially Daniel who is portrayed as a two dimensional evil guy who has somehow managed to survive and be successful in the world. His friend’s border on overly aggressive to downright cowardly as they get picked off one at a time. But this flick isn’t about the characters or the plot. Instead, the focus is on getting the men setup to be killed off in interesting and different ways. That it does quite well. 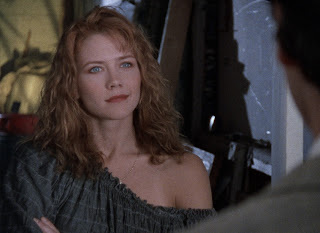 There are six kills, with five being shown on screen. We get a drill thru the chest, a head getting ripped off (one of the best), a dude gets “drained” of his bodily fluids in a most unpleasant way, and yet another gets zapped with a laser beam that turns him into a torch. But the best and most creative of the kills is when our killer lady robot lifts a guy headfirst into a spinning rotor blade. His noggin’ gets split in half with part of it flying away. Toss in some goofy but workable effects gags of our killer robot wearing disguises to lure her victims to their doom and you get a lot of practical work on a lower budget. While not perfect it looks good enough and I dug what they were going for.

The cast is solid with Stacy Haiduk (Super Boy), Brian Backer (Sleepaway Camp), David L. Lander (Squiggy from Lavern and Shirley), Bruce Davison (X-Men), and several other familiar faces. For the most part they do a decent job, especially Lander as a wise cracking coroner that acts as comic relief. The one thing that shocked me was the performance of David Naughton as the police officer Dunn. He is utterly bland and has no onscreen chemistry with his love interest Haiduk. I feel like he phoned it in on this one. But other than that, it was fun to see some familiar faces chewing some scenery and having a good time.

Is Steel and Lace a great movie? Not really. But it does have enough going for it to justify at least a single watch. Also, if you grew up watching made for HBO or Cinemax flicks then I bet you are going to get a kick out of it.

Posted by Gutmunchers Lives at 10:05 AM