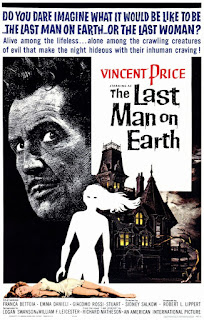 This is another one of those movies that I had thought I’d covered for the site ages ago. I’ve been watching The Last Man on Earth since I was a young’un in the seventies. Spoilers I really like this flick, though I do have one critique that I’ll mention later.

The world has been devastated by a plague that kills most, but some come back as vampires. Or at least that is what they seem to be. They don’t like their reflection (mirrors), are repelled by garlic, and can’t stand the sun. Also, there are crosses on our lone survivor, Dr. Robert Morgan, but they aren’t talked about. Seems like vampires to me. The movie kicks off with Morgan waking up and going about the daily exercise of being the last man alive in a city of monsters. He drops off some bodies in a burn pit, goes to the grocery store, picks up some fresh garlic, gets gas, and then hunts down some sleeping vampires so he can stake and then burn them. He is on a one man mission to clear the city of them.

After a close call when he falls asleep while visiting his dead wife’s coffin, we get a flashback to a pre-plague world. He was a respected researcher who was trying to figure out a cure. Clearly, he has failed! But it gives us a chance to see him lose all his friends, his daughter, and finally his wife. Then it bounces back to today, three years after everyone died, and he sees a dog. I won’t tell you how that ends because it is sad. But because of this encounter he also sees a girl… in the daylight. Maybe he isn’t alone after all. Some more things are revealed before we get to the ending that shocked some but not anyone who had ever read the book this is based on. 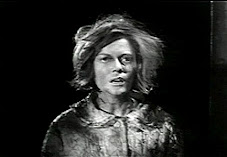 This story may seem familiar as it follows the standard survivor under siege formula that we are all used to. The key here is that The Last Man on Earth as well as the book I am Legend are the genesis of this type of plot device. Even George Romero came out and said that this movie was a big inspiration for Night of the Living Dead. If that isn’t enough to make you want to watch this, then I don’t know what else to say. Oh, wait I do.

Watching our character wander around the abandoned city going about his business of day to day errands is very disturbing. Especially when the nonchalant behavior continues to the killings of the sleeping vampires. They never spend any time explaining why he is do dead set on wiping them out when that seems futile as he is only one man in a large city full of them. This is especially so when we see that every night when the sun goes down, they lay siege to his home and are unable to get to him. So why is he so bloodthirsty? Is he just bored? Not explaining to the audience is a cool choice and over the years I’ve gone back and forth in my mind about Morgan’s motivations. When a movie engages me and makes me think that is a good thing. 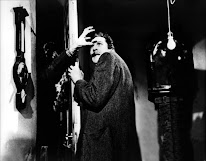 For most of the movie we are just watching Morgan, which means you need a good actor to pull it off. They cast the legendary Vincent Price in the role which alone makes the movie worth it. Price is the sort of actor that can make anything he is in better merely by being there. His screen presence is equal to anyone before or since and he can make any line or situation believable. Well maybe not any. My only real complaint is that as much as I love Price, he isn’t an action star so when he is running around doing battle, which is quite a bit, I wasn’t totally buying into it. Then again, the quiet moments work so well that I can forgive The Last Man on Earth for this. He also sells the ending which I’m not going to spoil here.

You can keep The Omega Man and I am Legend, which are both versions of the same source material. This is the one that feels closest to the book which I’ve always loved. This is in the public domain and available everywhere. Take some time to check it out. I think you are going to dig what you see.

Posted by Gutmunchers Lives at 2:04 PM