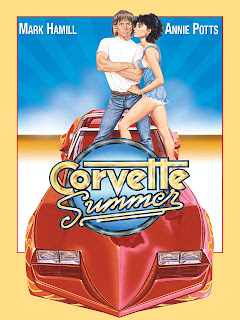 My deep dive on car movies continues as I take a look at this Mark Hamill flick made the year after Star Wars came out. Here he plays a high school senior named Kenny. We first see him with the rest of his classmates cruising a junkyard looking for a project car. He is a very talented artist and loves cars. He finds and saves a corvette right before it is to be crushed. Then we see he and the rest doing a killer custom job bringing the Vette back to life. At least it is what passes for killer in the seventies. The first night the students take it out for a drive it gets stolen.

The shop teacher, Mr. McGrath, tries to tell them it was just a commodity to be bought and sold. The insurance will pay for it so their efforts still helped the school. But Kenny was very attached to the car, so after graduating he goes looking for it. Ending up in Las Vegas he finds a “hooker in training” named Vanessa who becomes his girlfriend. He keeps having near misses with the car until he finally locates it. It is in the possession of a guy named Wayne who runs a car theft ring. This leads to some shenanigans before Kenny finally rolls back to his old high school to return it. Classes are in session, so I guess that summer is at an end.

Unlike some of the movies I’m going to cover for the Automotive Mayhem marathon this isn’t a ninety-minute-long car chase. I mean Kenny is chasing after the Corvette, but this is more about him meeting different people and growing up. There are people that he runs into along the way like Vanessa and a character referred to as Mr. Lucky, played by the late Dick Miller. This is just such a neat coming of age story that just so happens to have some cool vehicles in it. Again, being a car movie, we get to see some sweet rides in addition to the Corvette including a nice Camaro. Kenny also has to deal with disappointment with adults being dishonest, this was a made for the drive-in so the “you can’t trust anyone over thirty” crowd had to be appealed to. 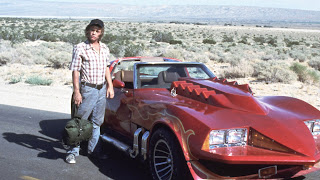 There is only one big chase, and it happens at the end of the movie. Just one car gets crashed and there aren’t that many stunts. But again, this is a different kind of car movie. Why include it here? Corvette Summer is solidly set in and around car culture, so it just feels right. Plus, there is a bad ass van in the movie. If you have a bad ass custom van in your movie then it is going to get covered in the Automotive Mayhem marathon.

A few other things that I wanted to note about Corvette Summer. We get some excellent shots of the Las Vegas Strip in the seventies that I rather enjoyed. I’m a nerd for these little glimpses of the past that movies like this can provide. I’ve already mentioned Dick Miller, but this is a killer cast. Annie Potts is Venessa, Danny Bonaduce and Wendy Jo Sperber are a couple of his classmates. You might not recognize her name, but I promise you have seen her before. We also get Kim Milford who was in Laserblast. Hell, we even get to see Brion James as a henchman! My favorite though was a sleazy dishonest gas station owner that hires Kenny. I recognized him but couldn’t remember where from. His name is Phillip Bruns, and he was the drunken old doctor from Return of the Living Dead 2.

This is just a fun and breezy way to kill an hour and a half. I’ve loved this one from the first time I saw it and as a kid thought it was cool that Luke Skywalker had a corvette… I mean I was only nine years old so cut me some slack! I highly recommend Corvette Summer you won’t be disappointed.