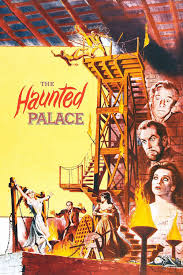 The action starts with some angry villagers burning a warlock at the stake. He curses them and their descendants for what they have done to him. You know at some point wouldn’t people learn that they needed to gag witches/warlocks before burning them? So of course, years later another man, named Charles Dexter Ward, inherits the place and sure enough is the spitting image of the long dead warlock. The locals try to warn him off, but he ignores them. Before you know it, he is possessed and starts to make good on the threat of revenge. It is up to Ward’s wife and the local doctor to stop him before it is too late.

I grew up on the movies of Roger Corman, many of them starring Vincent Price. I mean these were in constant rotation for all the late-night horror hosts back before the days of cable and VHS. So they have always held a soft spot in my heart just from nostalgia alone. Still I’d say that these are still solidly made, entertaining drive-in fare. Price is excellent as our lead, as he almost always is, and brings the character of Charles Dexter Ward to life. He might chew a bit of scenery, especially when being mean to his wife, but it fits with how the rest of the film plays. Price is one of those rare actors who can make any production, regardless of how bad, watchable with his performance alone. Luckily with the Haunted Palace he has some help from genre favorites Long Chaney Jr. and Elisha Cook Jr. (who is also in another Price favorite of mine House on Haunted Hill).

You can always count on a Roger Corman movie to get to the action and never let up. The Haunted Palace is no different. It starts off with a bang with the burning at the stake and the action keeps coming with some revenge killing and even more burning! Corman makes sure that he squeezes every penny of the budget onto the screen and it shows. The movie feels much larger then it probably should with the money spent on its production. I also like how Corman gives his actors screen time and takes full advantage of their skills. At this point, Lon Chaney Jr. was on the downside of his career and many of the films he made during this time basically wheeled him out and gave him little to do. Here he gets to be a creepy assistant that comes out of nowhere for some jump scares. As a horror fan, I like it when an older 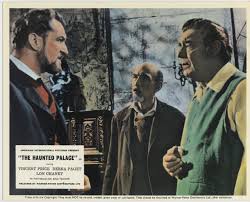 actor is shown respect. Though it was probably Corman wanting to get his money’s worth! Either way it makes it that much more fun to watch.

This movie is very loosely based on H.P. Lovecraft’s The Case of Charles Dexter Ward. I say very loosely based because other than character names and the mentioning of a couple elder gods it has very little to do with Lovecraft’s universe. I only point this out because if you are a nerd for Lovecraft’s writings, as I am, this might disappoint you. But that shouldn’t make you avoid The Haunted Palace. There really is a lot to love about the movie. Consider this a recommendation from me.

Posted by Gutmunchers Lives at 2:41 PM