Probably because of my age seeing movies have always felt like an event. Grabbing blankets and chairs for the drive-in or scanning the TV Guide to see what was playing on the late show Friday night always provided some excitement. Sharing it with a group only made it better. With today’s technology being able to watch anything you want whenever you want in the comfort of your own home is nice, but also in some ways misses the point. I’m apparently not the only one that understands this.

Dead End Cinema is the brain child of a like-minded guy named Eric. I met him when I was trying to get some classic horror played at a historic local theater. I put a lot of work into events that weren’t attended well, but I did get to meet some other fans, Eric being one of them. He talked about having his own setup in the back yard where he showed movies to friends and family under the name Dead End Cinema. Well that was a genius idea and while I had missed out on the 2016 season (it gets cold in Ohio in October) I wasn’t going to miss opening night 2017. 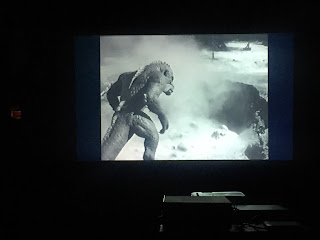 After grabbing my friend Dustin, he and I headed out for the forty-minute drive to Eric’s. Yeah, I live in the middle of nowhere so one must travel for the cool stuff. We arrived and I was immediately impressed with the setup. There was plenty of space and the sound, projection, and screen were all well thought out and configured. What was even better is that I got to meet and talk to people who love the same kind of movies that I do. It isn’t often that I get to have conversations with knowledgeable fans and I was even inspired to go looking for a couple of movies I hadn’t seen in a long time. Nothing like hanging out with other fans to get you excited again!

Okay time to talk about the movies. Eric kicked the season off with a couple of classic ‘50s features 20 Million Miles to Earth and Invasion of the Saucer-Men. 20 Million Miles to Earth is your basic creature feature sci-fi movie. A rocket crashes on the Earth after returning from Venus and an alien gets loose. It features some nifty stop motion effects work by the legendary Ray Harryhausen and it takes place in Italy which lets us see some international landmarks get smashed. Can’t ask for anything more than that. 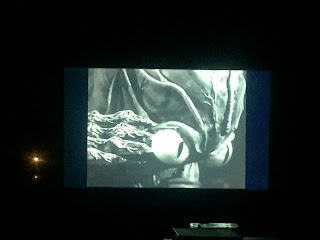 Next up was Invasion of the Saucer-Men. You might never have heard of this one, but you have likely seen the aliens from the movie. This movie has its tongue planted firmly in cheek as it follows the misadventures of a couple teenagers trying to elope on the very night that little green men from outer space arrive! You will hear some variation of the line, “Of all the nights…”. Toss in a couple of conmen, one played by the always fun Frank Gorshin, and some bumbling military for an entertaining hour.

I hear often that you shouldn’t try to hold onto the past. I get that is probably good advice, but somethings are worth holding onto. While I like new movies, I don’t like the experience of seeing them in the theater. It just isn’t as fun as it used to be. Instead of complaining we fans should try to keep this sort of experience alive. My foray into programming some movies for October in a theater failed. But what Eric is doing is very cool. If you are close to the Akron/Canton area hit up the Facebook group below. If you aren’t then let this inspire you to do something like it in your neck of the woods. So, while the drive-ins near you may have closed or only play family movies it doesn’t mean you can’t capture the same feeling of sitting under the stars and program the kinds of movies you want to watch. Make it happen.