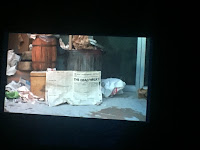 It was time for another bit of backyard cinematic fun at Eric’s place. With the recent passing of George Romero he decided to do something a bit different, a triple feature! In honor of the inventor of the modern zombie film we watched the big three of Night of the Living Dead, Dawn of the Dead, and Day of the Dead. Time to dive into some classics.

After having a nice meal at a local pizza place with my lovely wife I headed off to the show. I was flying solo again due to people needing to get paid. Hey in this economy you need to work when you can get it! I arrived a bit early, well really early but I brought leftover pizza and Lerch’s doughnuts so I think all was forgiven. I had a nice chat with our kind hosts and even got to listen to some music before the rest of the crowd showed up. Properly armored up with bug spray, mosquitos are a common theme this time of year in Ohio, I settled in for some zombie action.

Warning there are spoilers below! But then again, these movies are thirty to almost fifty years old. You really should have seen them by now. But courtesy is a must here so you have been warned. 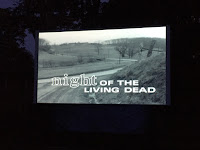 Watching them in order meant that the first movie was Night of the Living Dead. It opens with Barbara and Johnny visiting a cemetery and ends up with our hero Ben taking a bullet to the head. In between we get lots of zombies eating bugs and locals. Really girl you should stayed in the house! And and while he may have been a jerk it is clear that Harry Cooper was right about the basement being the best place to hide out.

What can I say about this one that hasn’t already been said? This is a classic that started the modern zombie genre. Without this one you don’t get the Walking Dead or any of the many other attempts at recapturing the awesomeness that is a zombie outbreak. Night also established the Romero formula which was to make a movie with characters that are interesting and connect with an audience. Just tossing a bunch of characters into a house wouldn’t have worked as well, but give them relatable flaws and the viewer is sucked right in. 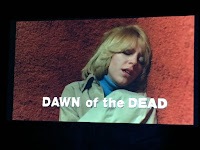 Night was followed up by Dawn of the Dead. The outbreak has gotten out of hand by now and things are beginning to fall apart. The government is trying to control the zombie menace by making citizens destroy the infected right away to prevent the spread of the dead. But as one character says some still believe that there is still respect in dying. Here we are introduced to Peter and Roger, members of the SWAT team trying to enforce the rules about destroying dead bodies. Thru Roger they meet up with Flyboy and his lady Fran as they take off for parts unknown in a helicopter.

This is my favorite movie. Not favorite horror movie or zombie movie but my favorite movie period. I could mention the obvious commentary about consumerism with them holding up in a mall with the dead desperately trying to get in. Or how they decide to defend it against the raiders when it is suicide to take them on. I get it greed is bad. What I want to focus on is again how Romero gives up characters to root for. Who isn’t sad when Roger eventually dies from his bites and comes back as a zombie? Hell, I was bummed when Flyboy “bites” it, pun intended. This is in spite of the fact that it was his own damn fault. The characters are why I’ve always loved Dawn and not the gore or zombies. Well okay maybe the gore and zombies are part of the fun, but Peter was sad when Roger died! 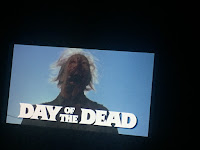 The last movie of the night was Day of the Dead. Things have fallen completely apart as it appears the dead now own the world. We are introduced to our characters as they fly around Florida in a helicopter looking for survivors. Spoilers there aren’t any! They return to an underground base where military discipline has fallen to pieces. I mean they are growing weed right in the open! Though not all of them are smoking it, especially Captain Rhodes. Really that dude needs to chill out. Terrible things happen, we have a mad scientist with a trained zombie, and a suicidal soldier that is left alone to kill himself and everyone else.

Confession time. Initially I didn’t like Day of the Dead. The tone is almost cartoonish with over the top performances, especially from Joe Pilato as Captain Rhodes. Eventually it clicked with me that was the point of the movie. You have these characters locked up underground trying to hold onto a world that is dead. The zombies are a metaphor for that. The dialogue and performances are so large because everyone is losing their minds with the impossible task they have taken on. The only healthy characters and eventual heroes are the ones that give up and start over. Here Romero allows us to tag along with the “good” guys by making the other characters so crazy that we can’t relate to them. At least we shouldn’t. If you fancy yourself a Captain Rhodes you might need therapy. Just saying…

So that is it. Romero night at Dead End Cinema was a tremendous success. On a personal note if you read my post about the passing of George Romero (here if you haven’t yet) I mention that each time I watch his movies it is part of the experience. These memories stick with me and come up whenever I watch re-watch them. This is the first time that I’ve watched them since he passed away and it was under the stars with friends. This was a good thing.

I always finish these reports up with a sort of pep talk. If you are in the Canton Ohio area and want to attend one of these events drop me a note or better yet join the Dead End Cinema Facebook group located here. If Dead End Cinema has inspired you to do something similar please let me know by sending an email thru the form to the right. We might even mention you in our next Road Trip report!

© Copyright 2017 John Shatzer
Posted by Gutmunchers Lives at 9:22 AM