I have certain movies that I consider keystones to my love of horror movies. They are linchpins from my past that have made me the nerd that I am today. Without these I wouldn’t be blogging or writing for the magazines. House on Haunted Hill is one of these movies that I’ve been watching on and off for the last thirty years. Clearly, I love it and now I need to try and make you love it too. Unless you already do then consider yourself a recipient of a virtual high five! 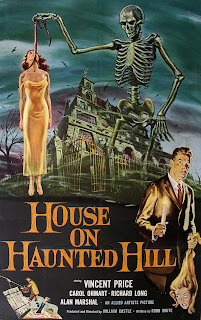 Vincent Price portrays a rich man named Frederick Loren who has invited some strangers to a party at a haunted house. They are to be locked in at midnight and if they survive until the morning each person will receive ten thousand dollars. It will be just himself, the guests and his wife once the doors are locked. There is a subplot with Frederick and his wife, Annabelle, where she has tried to kill him at least once before. She wants to be rid of him but not his money. On the other hand, it is implied that Frederick has done away with a couple of wives already.

After some scares, the doors are locked early trapping them in the house before they can decide to leave or stay. As the night goes on Annabelle is killed and suspicion of her murder falls directly onto her husband. One of the other guests, a young woman named Nora, is seemingly being tortured by the house. A head shows up in her luggage, a creepy old woman keeps sliding in and out of the room she is in, and random hands grab at her. Is it the house trying to drive her mad or is something else going on? Well I’m not going to tell you!

I’m a sucker for anything Vincent Price and here he is given something to sink his teeth into. He gets to play both kind and evil. When Nora is upset and can’t leave Frederick does seem to feel badly for her. And when Annabelle is killed he seems upset about her death. Though that could all be an act by the character as earlier he is threatening towards her when she refuses to attend his party by staying in their room. He gets a bit physical with her until she changes her mind. Basically, some spousal abuse by a rich white guy… Things were way different in the ‘50s.

I also love the atmosphere of House on Haunted Hill. Much of this comes from the direction of William Castle. He isn’t trying to make things too “artsy” but does hit the audience with a good scare every few minutes or at least what would be a good scare for an audience in the ‘50s. And it is clear that he was thinking of the gimmick he would use to sell the picture while shooting it. Here we get a scene that is clearly there for an extended period of time for him to have a skeleton zoom across the theater to scare the audience. I like this sort of showmanship and hate the fact I missed out on it. Someone needs to do a revival showing of this and the Tingler in a theater with all the gimmicks in place!

There are many other things to like about House on Haunted Hill. Elisha Cook Jr. has some great monologues that set the mood of doom and gloom. One of my favorites is, “Six hours six of us. Time enough…”. The music is creepy and old school with an organ playing a big part of the finale. Hell, the skeleton gets billing in the credits! God, I love this movie! It is easy to find since it is in the public domain. Go watch it now you have no excuse. Heck instead of a trailer I'm linking to the movie above. Happy Halloween!