It has been a while since I did a Throwback Thursday. Since I’m in the middle of the Slasher marathon here at the site I thought it would make sense to dig this bad boy up. I did this review of the new Blu-Ray release of The Mutilator a couple of years ago for Grindhouse Purgatory, a magazine that I also write for. If you are interested in picking up some issues of the magazine you can find it on Amazon. I highly recommend it! 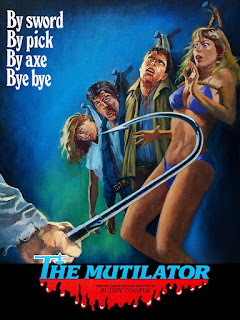 In the last issue of Grindhouse Purgatory I introduced a new feature that I called, Holy Shit I can’t believe this got a Blu-Ray release with special features. That is entirely too long of a name for an article. So instead it is now simply the Blu-Ray report. My intentions are still the same as I will be covering movies that I can’t believe got a proper Blu-Ray release including special features and a nice new transfer. Last time around I covered a personal favorite of mine, The House of the Long Shadows and again this month I get to cover another enjoyable blast from the past, The Mutilator.

The movie starts in the past where we see a little boy, Ed, accidentally shoot his mother. Years later that boy has grown up to be a bored College student. He is sitting around with his friends wondering what they are going to do with their Fall Break. Ed’s dad calls and tells him that he needs to shut down their beach house for the winter. Sure enough they all head down there to work and perhaps play a bit. What none of them realize is that Big Ed, the dad, has finally snapped about his wife’s death. Time for some payback!

The Mutilator is one of those earlier entries into the slasher genre that hit while it was still big. Unfortunately, it was late enough that it was butchered, pun intended, by the MPAA. Much like what happened to My Bloody Valentine, they were threatened with an X rating and had to cut much of the gore down to get the coveted R. This includes one of the best kills being neutered due to the sensitive nature of the injured location… Yeah you probably shouldn’t put a fishing gaff there.

There were a lot of slasher movies that popped up during the ‘80s. Many of them were like the Mutilator and were made by inexperienced filmmakers on a lower budget. It wasn’t hard to crank one of these out and make a profit on it. Even if your theatrical run was tiny the video stores were clamoring for product. Toss some blood and skin on the screen and it would sell. That meant there were a lot of mediocre and sometimes outright bad movies tossed on the shelves sporting a great cover but not much else. I mention this because The Mutilator had a great cover, an even better tag line, and delivered on the goods even with the gore cut! This is a great movie that finally has a decent release.

Time to talk about the new Blu-Ray. First and most importantly for the first time ever we get to see the movie in its uncut version. Now this has become a gimmick with new movies where they will add some extra footage, many times just an extra scene here and there, changing the movie enough to lose their rating. Then they can say it is unrated because they never resubmitted it. What was cut from the Mutilator is all about the gore and kills. All of it has been restored and it makes the movie so much better. What was only hinted at before is now executed on screen with some nice special effects work.

The transfer is gorgeous. I’ve only ever seen the movie on VHS or on DVDs of questionable origins (mostly VHS rips I’d imagine). The movie has never looked better and it was like watching it for the first time. Many of the night shots in the old copies that I’ve watched have been very dark, but with this new transfer there is a lot to see. It was like watching the movie for the first time.

Included on the Blu-Ray are some great special features. The best of them is a making of documentary that follows the production of the movie from its inception to release and distribution. You get excellent interviews with most of the cast as well as director Buddy Cooper. They have some great stories about the party atmosphere and some challenges they faced while making The Mutilator. There is also a second feature that covers the special effects works and features an interview with effects man Mark Shostrom. I thought it was interesting to hear him talk about the kills and how some of them didn’t work and had to be changed at the last minute. I’m a nerd about practical effects work and I found it a great watch.

Honestly, I would have recommended the Mutilator before we had this new transfer with the kills restored. Even cut up it was an excellent entry into the slasher genre. Now that it has been put back the way it was supposed to be seen and is packaged with the new features you need to put this one in your collection. Let me finish with this. By Sword… By Pick… By Axe… Bye Bye