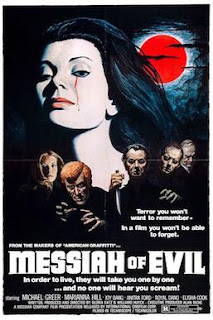 After an opening scene involving some murder the action moves to the main character. She is the daughter of an artist who comes to the small coastal town where her father as retreated to do some painting. She finds his house empty with no leads on where he has gone. The locals seem rather shifty and give her the cold shoulder when she asks them if they have seen him. The daughter, Arletty, eventually meets a strange man who is also a stranger in town. His name is Thom and with his two lovely companions is in town doing some sort of research on something. That bit gets somewhat vague, but he does become interested in Arletty and the trio end up crashing at her house.
So, what is going on? Without too many spoilers the locals are all caught up in some sort of curse that “infects” them. This makes them destroy or recruit outsiders to join their cult. A hundred years before the events of this movie a mysterious stranger walked into the community and then into the sea. It is explained that he was the minister of the Donner party, so I guess also a cannibal. He promised to return a hundred years later for the end of the world or something like that. Again, here things aren’t totally clear. After a vague ending we are treated to Arletty in a mental hospital where she has apparently been telling the story from.

This is one of those strange movies where I can’t tell if I like it or hate it. The plot is a mess and doesn’t make much sense. What story we do get is told in a weird flashback to the stranger that sets up the blood moon and attempts to explain why people are acting so weird and running around murdering those that don’t belong to their little cult. The motivations of said cult aren’t explained and neither is why some folks are killed and others turn into cultists. We also get some very slow spots were the flick spends a lot of time on the visuals without any attempts at moving things along.

That said there are times that Messiah of Evil is really good. At different points both of Thom’s lady companions go into town. One is trying to leave and the other pops out to see a movie. This leads to a couple sequences that are excellent. One has the unfortunate girl meeting up with some locals frequenting the butcher’s table at the grocery store. While not seen it is implied that she gets added to the menu. The other is set in the movie theater and has one of the coolest scenes I’ve ever seen in a horror flick. The girl is watching the trailers before the feature and we see a lot of creepy looking folks filing in and sitting behind her. This is genuinely spooky looking and the scene that most people remember from the movie. Again, it doesn’t end well for her.

I had difficulty writing this review because I feel so ambivalent about this one. The movie has its fans and I can see why. Those two scenes I mentioned above aren’t alone. There are some great scenes and moments to be had in Messiah of Evil, which I appreciate. But there are also times when the plot gets bogged down. In many ways this feels like an art film with its focus on camera angles and weird lighting. Unlike an Argento film this feels forced and doesn’t help tell the story. Sort of like art for the sake of art. I think I’ve talked myself into not recommending the movie.

Then again maybe I haven’t. I think I’ll leave it up to you, the reader, to decide. It is easily found on YouTube or any of those public domain sets floating around if anything I’ve said interests you. If not, then I’m glad to have saved you from wasting your time on it.

note: I've linked to an online copy of the movie instead of a trailer.

Posted by Gutmunchers Lives at 4:59 PM