note: Yes I know the trailer is in German. It was the best I could find. 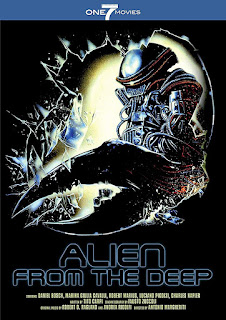 I do love me some Italian “homages” to other movies. Here Antonio Margheriti combines an action movie with an Alien rip-off to make something that is so weird that it ends up being awesome. When I say he combines them I actually mean that the first half of the movie plays out like an action flick when at almost the exact halfway point an alien shows up and it becomes a creature feature. It really does feel like two entirely different flicks. Before I get too far ahead of myself let me give the plot synopsis.

The action starts off with a couple of do-gooder journalists trying to sneak onto an island that is being used by a chemical company to, according to their P.R. department, responsibly dispose of chemical and radioactive waste. They successfully avoid being shot and sneak into the plant to discover that the company’s idea of responsible disposal is dumping the barrels into an active volcano! Yeah that doesn’t seem like such a good idea. They are spotted and the two split up to escape. The cameraman gets caught by security while the other, Jane, manages to make her escape in the jungle by hiding in and then jumping out of a helicopter. After the jump she is chased by mercenaries until she bumps into Bob, the local snake hunter, who gets in a firefight with the bad guys chasing her. Together the pair make their escape and hide out to figure out what to do next.

Soon after that something crashes into a nearby lake. It turns out to be an alien attracted by the radioactive waste spewing out of the volcano. It starts to kill off anyone crossing its path while making a beeline for the facility that is dumping the waste. Along the way it scores quite a body count between using its giant claw to hit people and the fact that if it touches you your doomed. It either melts you like acid or infects you… sort of. This kind of depends on what works best for the script at the time it happens! All the bad guys and our good guys end up together fighting the monster in a final showdown where it seems bulldozers are the best weapon.

The first forty minutes plays out like an action movie with a lot of sneaking around, gunfights, and sharing of evil plans. Helicopters are shot, people jump from extreme heights, snakes kill a bunch of guys and there are explosions. If that was what the rest of the movie was going to be, I’d be happy. It is paced quickly, gives you exactly what you expect and ends up being a lot of fun. Then it switches into an equally decent monster movie. The creature arrives and some nameless characters get torn up by it. We see faces ripped open and eyes hanging out. Another has an arm melted gruesomely and there are several other wounds that are equally gooey.

The creature is kept underground for most of the movie with just a large black claw shown attacking the victims. This is probably for the best since when we do finally see the entire creature it is a bit awkward and an “homage” to the queen from Aliens with about a tenth of the budget. Still the big fight with the bulldozers is fun and I’m a sucker for cheesy monster movies so this ticks off a lot of boxes for me.

If you enjoy Italian genre cinema and/or a goofy creature features Alien from the Deep is a must watch. I hadn’t popped the DVD into the player for a few years and had forgotten how much fun it is. I highly recommend it.