Welcome back for another of my blind watch reviews. Every once in a while I like to randomly pick a flick from one of the many streaming services I subscribe to and watch it. I go out of my way to not know anything about what I’m about to watch. No trailer, reviews, or plot synopses allowed! It reminds me of browsing the shelves of my local Mom and Pop video store back in the day picking stuff solely based on the cast and whether it had a bad ass cover. Sometimes this works out and other times I’m miserable. Let’s see where Head Count falls. 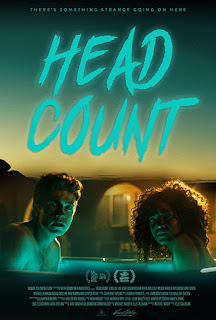 We meet our main character, Evan, as he drops his college friends off at the airport. Seems like they are going on Spring Break while he is doomed to spend it with his older brother in the middle of nowhere. We watch as he drives into the desert to a small trailer where his brother, Peyton, is meditating. The pair go for a hike in the desert and meet up with a group of young people that have rented a house nearby and are partying. Evan hooks up with a girl, Zoe, and ditches his brother. After telling spooky stories around the fire weird stuff starts to happen. It seems that reading random stuff off the internet to scare your new friends isn’t such a great idea. You might accidentally summon a demon! Or at least that is what I think it is. It might just be a vengeful spirit or some other supernatural baddie. For the purposes of this review I’m just going to refer to it as a demon.

This isn’t what I was expecting at all when I sat down to watch Head Count. Early on it seemed as if we were going to get one of those “kids go off to an isolated location to party and get picked off one at a time” sort of flicks. That kind of happens but not how I thought it would. Be warned that some spoilers are coming. When Evan reads the text from the website, he accidentally summons a demon or evil spirit and starts off a series of events that don’t end well. The thing doesn’t take any direct action for most of the movie but is instead a shapeshifter that lurks in plain sight. So, you have a bunch of instances where someone is in more than one place at a time. What is really cool is that the audience can catch onto this if you are paying attention long before the characters do. This gets super creepy as the first few times are very subtle and you aren’t sure what you just saw.

Head Count is also written in such a way that it explains why the monster just didn’t kill them all right away. There is a ritual that forces the victims to come in sets of five. This is further reinforced in a couple other ways that if you are paying attention become obvious. The creature has to manipulate them so that they break into appropriately sized groups before it can get to the business of killing them. I’m always complaining about movies that don’t take the time to make sure they have a fleshed-out script. Here we have an excellent example of what you should have done before picking up a camera. There are a satisfying set of rules by which the story has to play out. I like that.

The kills are fairly tame in that we don’t see a lot of blood. But there is a disturbing twist to them in the fact that the demon causes the victims to commit suicide. Seeing the character go slack jawed and dead eyed while looking for ways to kill themselves is… well I can’t think of a better word than disturbing. The individual actors do a wonderful job selling these scenes as well as being terrified once they realize they are about to watch their friends off themselves. This is one of those rare movies that had kills that bugged me, in a good way, without being over the top gory. Well done guys.

Finding a movie like Head Count makes me want to keep picking stuff at random to watch. If you like this idea and want to try it yourself be warned that it normally doesn’t work out this well. That said I think you should check this one out, consider it highly recommended.

Posted by Gutmunchers Lives at 10:18 AM