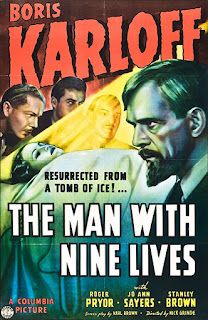 I recently realized that I hadn’t been paying as much attention to the classics that I used to. I’m a big fan of horror from the thirties, forties, and fifties. Karloff, Price, Chaney, and Lugosi are favorites of mine. It has been way too long since I’ve covered them here at the site and I figured it was about time for me to correct that. Why not start off with this little seen but fun flick starring the great Boris Karloff.

The movie kicks off with a doctor, Mason, showing off his latest procedure. He has found a way to freeze and then revive people. This is a big deal because while frozen the people can heal terrible injuries and diseases. His research is based upon a book by Dr. Kravaal who mysteriously disappeared after writing it. The hospital administrators aren’t happy with the publicity that Mason has been generating with his experiments and decide to send him on a forced vacation while they have other researchers verify his results.

Mason and his nurse, Judith, decide to spend their time off looking into what happened to Kravaal. This leads them to an isolated house and the discovery that Kravaal has ended up frozen for over ten years. Also frozen with him are a group of men that we discover thru a flashback had been investigating Kravaal and a patient he was treating. Things go sideways on them and they all end up in the deep freeze for a decade. The length of time is a big deal since it is far beyond what they have been able to do previously. The formula for the solution that allows this is lost thru some shenanigans and the good doctor decides he must start experimenting on the survivors to recreate it for the good of mankind. This leaves Mason and Judith to stand by helplessly as Kravaal goes about his work.

This is an excellent movie. Karloff plays Kravaal with a degree of kindness that belies the fact he is straight up murdering people to try and recreate the formula that will finish his life’s work. There is no over the top cackling here as he instead seems quite sad by what he feels must be done. This is yet another example of Karloff showing a great deal of respect to the genre and taking his part seriously. No matter how poorly written or minuscule the budget was he always gave it his best and with The Man with Nine Lives it helps make what is a decent movie into a great one. The rest of the cast is made up of actors that I have seen before in supporting roles. While not household names they were all solid working professionals that know what is expected of them and deliver the goods.

The story is solid and follows many of the tropes involved in a traditional mad scientist flick. You have the well-meaning but misguided genius who is far ahead of his time. There are the characters who don’t understand and thru their ignorance make the situation worse. We also get the requisite outsider who can act as a proxy for the audience helplessly watching things play out. All of this is wrapped in a tight seventy-four-minute runtime that gets to the good stuff and never lets up. Combined with the outstanding performance from Karloff this makes for a wonderful way to spend an evening.

The sets are simple but effective. Most of the story takes place in Kravaal’s underground lab. This consists of a couple small rooms and the ice chamber where he freezes his experimental subjects. I liked the look of the movie as they light it very dark and make great use of the shadows. They also pull off the trick of making it appear as if the room is light by the oil lamps and fireplace. I might just be an old guy here, but nothing is quite as atmospheric and creepy as an old black and white movie done right. The Man with Nine Lives is a perfect example of this.

I have nothing bad to say about this movie. When you mention Karloff, everyone thinks about his performance as the Frankenstein’s Monster, and his later non creature roles in the classic Universal Movies. The guy was so much more than that with a lot of his best work coming in films like this one. It is easy to find and worth checking out. I highly recommend The Man with Nine Lives.