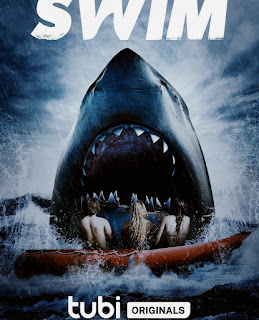 The Asylum is at it again with the shark movies. This time they have Joey Lawrence of Blossom fame as a dad who has to fight a shark that gets in his beach house after there is a big storm. Sounds like another silly Asylum monster movie, right? Nope they tried to play this one seriously despite the absurd premise. More on that later.

The movie kicks off with a sketchy landlord getting inspected and shut down. His rental property isn’t safe for human habitation you see. After the inspector leaves, he gets a call on his cell phone and it is a family coming to rent the place for the month. Being sketchy he doesn’t tell them the place is condemned and tells them he has fixed everything that was wrong last year. Spoilers… he hasn’t. After hanging up he gets eaten by the shark. We also see that the dad, played by Lawrence, can’t take a plane to meet his family at the house because of a big storm so he has to drive. That leaves everyone else at the house alone.

Nothing works, remember the landlord lied, so they call a handyman. While waiting for him to stop by a couple of them go frolicking in the water and get attacked by the shark. So they have to leave in a hurry. Though they can’t because the car gets smashed, and the handyman gets eaten by the shark that is now in the basement. More people get eaten, Lawrence’s character finally shows up, and the shark gets electrocuted. The end.

I was not expecting much when I sat down to watch Swim, especially after seeing the Asylum logo. Don’t get me wrong I do enjoy the goofy tongue in cheek flicks that they have made in the past. They aren’t good movies but can be worth a watch for a few laughs. That is what I was expecting with such an absurd premise. Sort of a parody of the killer alligator movie Crawl. But instead of leaning into the silliness and try to make a comedy ala. Sharknado, they play this one seriously. That was a terrible idea. When you have a mediocre cast of actors, a paper-thin plot that is completely unbelievable, next to no budget for special effects, and Joey Lawrence this is not the path to take. 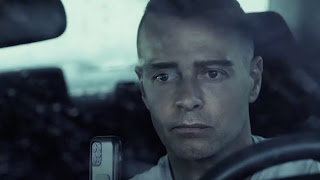 This movie is boring which is worse than just being bad. At least a bad movie will keep my attention by having me roll my eyes or mutter to myself about the stupid dialogue or effects work. Here we get long stretches of flat dialogue delivered by charisma challenged actors. Even Lawrence who has done some decent television work seems completely lost as what he is supposed to be doing. I’ve seen Hallmark Christmas movies with more emoting than this turkey. That was a bummer.

The special effects go from terrible to passable. Ironically the shark, which is normally the worst effect, is decent enough. The model is shown sparingly, and they try to keep the scale the same and to blend it in when sharing the screen with the actors. I appreciate that as far too many times the effort is lacking in this department. But then they screw things up by doing some questionable stuff with CGI rain and the big storm. I get you can’t afford big Hollywood rain machines but when we have characters walking into the house from a CGI hurricane and they are completely dry come on. How much does a bucket of water cost you? Also reusing the same badly done CGI lightning shot repeatedly was silly.

I could also point out how we have a character grabbed by a shark and supposedly going into shock that suddenly is “feeling better”! Or I could also point out that they do a terrible job of keeping the audience on our toes by telegraphing who is going to be chum and who is going to live. Maybe kill one of the kids and make us think no one is safe. Swim goes so wrong in so many ways that I just can’t recommend it.