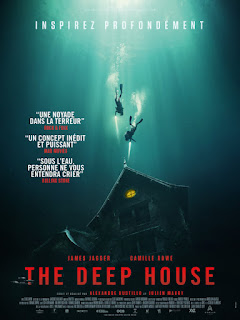 Tina and Ben are YouTubers who record themselves exploring out of the way and abandoned places. Ben is all about the clicks and to that end they find themselves in France to explore a town that was “drowned” when a dam was built flooding the valley where it lay. Their hope of getting some good underwater footage is dashed when they arrive to find the supposed out of the way location a tourist destination filled with families. Tina suggests that they make the best out of it and take some time to enjoy it.

These plans are derailed when a mysterious local informs them of an out of the way place that no one goes to. Underneath the lake there is an intact house and grounds for them to check out. Ben, still looking for his clicks, decides to go for it. Soon he and Tina are in their scuba gear swimming into the very dark lake. They find some stairs, an abandoned car, and finally the house. Oddly enough all the windows are barred but they do eventually find an attic window that is open. Once entering the house things get very spooky. Yeah, the place is haunted!

I’ve watched a lot of haunted house movies in my life. Some of them great and some of them not so great. But I would have assured you that I’ve seen everything you could do with the subgenre. That would have been wrong. The Deep House takes the tried-and-true formula and puts a crazy interesting twist on it. The idea that the house is under the lake and that they must dive to get to it was awesome. How has no one ever done that before? It adds a surreal feel to the proceedings that fit perfectly with the story. We also get the added bit of tension from the limited amount of air. It puts things on a clock and both the characters as well as the audience are aware of it. The best haunted house/ghost stories all have tension, and this adds to it. 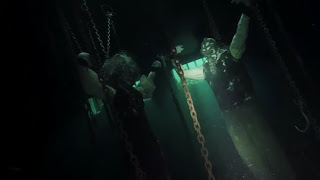 The scares are plentiful, and the movie is very creepy at times. The visuals of bodies floating in the basement, as well as the ghost girl that keeps popping up is great. They don’t overuse jump scares and I appreciate that. Way too many newer horror movies try throwing the proverbial cat off camera at the characters to get you to jump. That normally just makes me roll my eyes. Though I have to point out that the filmmakers are very clever with that particular trope. Twice in the movie there is a jump scare of sorts with a fish darting out at them from the darkness. Though the second time it appears it serves to move the story along which made it feel less cheap. It was also not until the fish appears a second time that I realized it was a catfish! Okay that is just brilliant and had me laughing.

This is one of the best movies that I’ve watched this year. Clocking in at only eighty-five minutes it wastes little time getting to the good stuff and when it starts it never lets up. The creepy out of this world setting, scares, and big twist were all satisfying. My only complaint is that I wasn’t fond of the ending, but that isn’t a deal breaker. Do yourself a favor and check out The Deep House.

Email ThisBlogThis!Share to TwitterShare to FacebookShare to Pinterest
Labels: '00s and beyond. The new stuff, Featured Creature Ghosts, Movie Review