I suppose I should weigh in on this movie. I did watch it during my October marathon but wanted to let it settle in and give it a second watching before going on the record. The movie starts off with us seeing a guy named Corey being hired to babysit a kid named Jeremy. This kid is a little shit that had me rooting for Michael Myers to show up and murder his ass! Oh yeah this is taking place in Haddonfield, which I suppose is important to point out, and they talk about the killings. So Jeremy messes with Corey and locks him in the attic, which freaks the dude out. The parents arrive home just as he kicks the door open sending Jeremy falling three stories to his death in the foyer of their fancy house. Roll credits.

After that we hear Laurie narrating a book that she is writing. She talks about Michael terrorizing the town and how evil lurks even though he has been missing since he killed her daughter. Laurie lives with her granddaughter, which is important later. Laurie crosses paths with the now released Corey, who spent time in an institution after the death of Jeremy. Both being pariahs in town (they blame Laurie for taunting Michael causing his murder spree) she feels a kindred spirit. This leads her to introducing him to her granddaughter and the pair hit it off right away. The problem is Michael is still alive and uses Corey to bring victims to the sewer he has been hiding in. They try to explain away his unstoppable nature by hinting that the evil in him heals his wounds when he kills, thus making him stronger.

Some stuff happens as Corey loses his mind and takes the mask away from Michael. I suppose it is time for him to finish off Laurie accomplishing what his predecessor could never do. Though I won’t spoil the big twist other than to say that Michael is apparently sneakier than we ever knew. In the end it does seem as if they put the whole Laurie vs. Michael storyline to bed… hopefully this time forever.

This movie has issues, the first of which was obvious when I saw in the opening credits that four people were credited with the screenplay. Normally that means either a troubled production or far too many chefs in the kitchen. Here I think it is the latter as they try and squeeze too much into Halloween Ends for my liking. When Jamie Lee Curtis is on screen the movie is far more interesting as I have over forty years invested in her character of Laurie Strode. Seeing her living a normal life and being kind to Corey is sort of sweet. They also do a good job with the script showing that every time she starts to feel happy something is there to drag her back to the past.

The grocery store sequence is a prime example of that when she is twirling her hair and flirting like a teenager. We know she never had that chance given what happened, but that hope is shattered when she leaves the store and is yelled at by a woman whose sister is in a wheelchair and lost her family to Michael. Again, they blame Laurie for taunting him and bringing him back to town. There is some excellent stuff like this in the movie that kick you right in the feelings.

But I get the distinct vibe that the filmmakers or maybe the company wanted to use this movie to setup what they are wanting to do next. This might be the end of the story for Michael and Laurie, but this franchise is too profitable to let go completely. So, we get the story of Corey, who I initially thought was going to pickup the Shatner mask and carry on, though it doesn’t work out that way. Both from her initial monologue and the one that plays over the end scenes Laurie talks about the evil that exists. Basically, Michael is a symptom, but not the cause of the horrible things that happened. They establish this with the Corey character’s transformation from innocent kid who had a horrible accident to stone cold killer recruited by Myers. The only reason I can see to spend the forty or so minutes with new characters, specifically Corey and those tormenting him, is to establish that they can and likely will move on with a new killer and final girl. A more accurate title would have been Halloween Ends to Start Again. 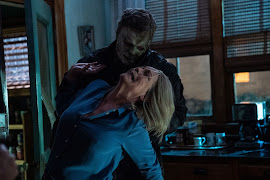 The fact that fans hated the new characters and wanted the movie to focus on what they where expecting which was the finale of Laurie and Michael makes a ton of sense to me. And I also agree that when they aren’t on screen the movie suffers and isn’t nearly as interesting or engaging. But I also understand the reality of them wanting to continue, though I’m checking out and not at all onboard from here on out. I basically just ignored and “got thru” the Corey crap so I could get to the good stuff. Is that ideal? Not at all and it made for an uneven story which goes back to my too many cooks in the kitchen comment when mentioning the four credited screenwriters. But at least Jamie Lee Curtis got one more badass moment, which I won’t spoil.

There are a solid fourteen kills in the movie, some of which are generic but others a lot of fun. The best of them is a blowtorch to the face, a nurse gets stabbed/pinned to the wall in a callback to the original, and a Radio DJ gets his jaw smashed and loses his tongue. There is also a decent head stomping and a spike to the eye, so you can see they didn’t skimp on the gore. This is brought to screen with a nice combination of practical effects as well as some digital assists. The kills helped get me thru the parts where I thought things were slow and ramp up as the movie closes in on the big finale. All in all, I was happy with the kills/gore.

My final word on Halloween Ends would be manage expectations. There is a good movie in here, one that our favorite characters deserve. Sadly, they also chose to setup the franchise for the future and that takes away from what this probably should have been. But if you can look past those flaws, and this is a flawed movie for sure, they at least didn’t screw up the characters. So instead of running off to sign some internet petition demanding they redo this (I mean honestly guys… what the hell?) maybe appreciate what we got and move on. I for one am happy with what I got, flaws and all.

Posted by Gutmunchers Lives at 3:06 PM