The movie starts off “in the past” where we see a mean businessman named Alex Windsor showing up at a children’s home to evict them. He talks about progress and stuff before the matron of the facility casts a spell on him. He laughs it off until he drops dead. Years later we are introduced to our main cast of Bo, Carson, and Jake. These middle schoolers are in that awkward stage between being kids (trick or treating) and teens (wanting to go to the cool party). The big conflict happens when Carson wants to sneak in to a high school party instead of getting candy.

As a compromise the three decide to spend Halloween night sneaking into the pop up Spirit Halloween store instead. That seems cool until the ghost of Alex Windsor shows up. He has an hour to torment them by possessing the decorations and chasing them around. Oh and if one of them is sleeping or knocked unconscious he can possess them and finally be free to walk the land of the living for more than an hour a year! Toss in Carson’s older sister Kate, who figures out they snuck in and comes after the trio, and you have a movie.

I’m not going to lie when I heard about Spirit Halloween I was intrigued. I can’t think of another attempt to tie a movie to a store, thought it makes sense. There were so many possibilities and cool things they could have done it seemed like a brilliant idea. Then I totally forgot about it. A few days after Halloween I quite literally asked myself “what happened to that Spirt Halloween movie?” and immediately set out to track myself down a copy to watch. This resulted in the review that you are currently reading. 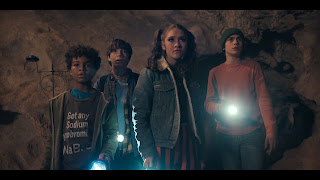 I’m sort of torn between being annoyed and enjoying this one. Maybe I was just dense, but I never got from the trailer that this was going to be a kid’s movie. Well okay not a kid’s movie but one targeted towards that odd “tween” audience that reads Goosebumps books. I went back after watching and checked out the trailer again and still don’t see it. Perhaps I had different expectations and because I got this watered down Saturday morning spooky show, I was disappointed. This wasn’t what I had hoped for as there are a lot of shenanigans running around the story being silly before anything remotely spooky happens and when that does occur it is maybe PG at most.

On the other hand, if I look at it as what I believe it was intended to be I can’t be that harsh. The cast is likeable and while the plot is predictable the movie is never boring. The setting of the Spirit Halloween store is fun, and they do make good use of the decorations. I also thought it was fun that Christopher Lloyd gets to voice all the animated decorations in addition to his brief appearance onscreen as Alex Windsor. There is even an appearance of television legend Marla Gibbs as Grandma G. If you have children, I think that the scares in this aren’t too bad and that they would probably get a kick out of it. Plus, there is even a neat little message about family squeezed in at the end. Considering the audience that it was made for I think that Spirit Halloween is a decent movie.

Don’t be fooled by the negative reviews online. Again, I believe this was sold to the wrong audience and that alone is why it is getting as much hate as I’ve seen. It is also likely why the movie sort of disappeared from most of our radars. Not an amazing movie but still there is fun to be had here for the right audience and expectations.