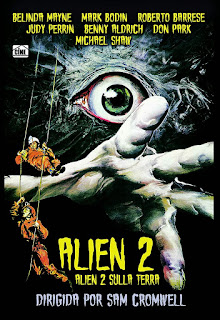 You have to love those wacky Italian filmmakers. This is one of several attempts to cash in on the popularity of the original Alien movie. This time we have some Astronauts returning from a mission in space, though this is mostly just in the background. Our main characters are a group of cave explorers who are on their way to do some spelunking. Though not before one of them, Thelma, stops by a television station to give an interview because the others are bowling. She almost faints on camera and her boyfriend, Roy, explains that she is psychic. This is important later.

So, the friends head out to explore the cave. When one of them is peeing he finds a weird blue rock and decides to take it with him. In addition to being a psychic cave explorer it seems that Thelma is also a geologist and loves rocks. But this isn’t any rock, no it is in fact an alien rock. It eventually hatches and attaches itself to one of Thelma’s friends. I think that the biology here is that the rock sprouts a critter that infects a person whose face eventually explodes out into an alien slime creature. How did the rocks get everywhere so quickly? What does the space mission mentioned earlier have to do with it? I have no clue as this movie makes not one lick of sense.

Let me establish right away that I have a fondness for these late seventies and early eighties Italian flicks. The bad dubbing, confusing story, as well as their incessant need to “borrow” whatever was popular that week puts a smile on my face. I mention this because while Alien 2 is an absolute mess of a movie I kind of liked it. From the silly attempts at acting “American” to the weird performances that are partly due to the dubbing and partly due to the cast I found the movie to be entertaining. Though I’ll admit it does drag a bit in the beginning, things do pick up once they hit the cave.

The special effects work is sort of fun. The creature design is a bit lame with it basically being some stringy tentacle looking things and a rock. But we do get some fun kills with a little girl missing her face, a face getting carved up, eyeball popping, and an exploding head. Though my favorite gag is a head getting ripped off and rolling along the ground. Okay that might be my second favorite as the alien hatching thru the eyehole of one of the ladies is memorable too. All of this is practical and while not the greatest work I’ve seen it is plentiful and fun. You can always count on Italian horror from this time period to toss some of the red stuff at you.

Now to the story. Like I’ve already mentioned it doesn’t make any sense. I think that stock footage of astronauts and space capsules are just meant to make it seem like whatever the rocks are came from space. But if they came from the mission how did one of them end up next to a building where one of them was relieving himself? More importantly how did they wipe out humanity, basically everyone is dead when the survivors escape the cave, if there were just a couple on the returning ship? This is where my years of keenly honed Italian genre movie watching skills come into play. Let me impart this wisdom to you. This isn’t going to make sense so just kick back turn your brain on idle and enjoy the proceedings.

This movie is never boring, always has some weird shit happening (intentional or otherwise) and kept my attention from start to finish. Remember the whole psychic thing? Well that allows for Thelma to sense the rocks and is used as an excuse for her not being a hatchery for little aliens slime monsters. Why? Let me remind you again that the plot makes no sense, but they explode a little girls face off so in my mind that makes up for it. I enjoyed Alien 2: On Earth and if you are of the same mindset as me when it comes to these kinds of movies then you may too. With that qualified recommendation I’m off to watch some more crappy flicks.