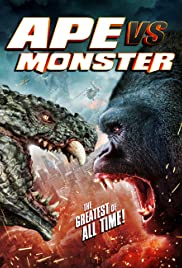 I love the Asylum and their Mockbusters. If you don’t know what that is well then please allow me to explain. When a big movie, say Godzilla vs Kong comes out companies like this will put out a similar but much cheaper version to cash in. While I’ve been disappointed in the last few that they have done I still haven’t given up hope that the Asylum can get back to making some fun bad movies. Is this the one? Time to check out Ape vs Monster.

The international space station almost gets taken out by something streaking towards Earth. They manage to get a picture of it and realize it is a space craft from a secret joint mission to space that the United States and Soviet Union worked on together in the mid-eighties during the cold war. It has been missing for years but apparently has returned home. The capsule only had one occupant, a chimpanzee named Abraham, who must be long dead after over thirty years adrift. Also on the ship is some weird green goo. This goo mutates Abraham turning him into a giant ape and when a lizard comes by and licks it up it becomes a monster. We also have some aliens zipping around directing the big critters to Washington D.C. for some smashing. Abraham the Ape fights off the alien control with the help of the humans and does battle with the monster. Well, they punch each other a few times. Then he kills the monster, and the aliens fly away. The end.

This movie is stupid and awful… and I loved every minute of it. This is the kind of silly bad movie that the Asylum used to make. Is it dumb? Sure is. Are the CGI effects terrible? Check! Is the acting bad? Oh hell yes it is! Did they get Eric Roberts for a day to sit in an office and talk on the phone like he is in charge? Absolutely. You are probably asking yourself why I like this movie or at least why I think this one is good when others are bad. When the Asylum is at their best, they are tossing so much at the screen that you can’t possibly be bored enough to think about what you are watching. Not when bad CGI monsters are running amok being chased by even worse CGI helicopters whose exteriors don’t match the set that the actors are in at all! 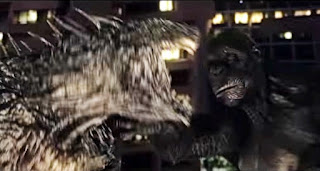 With Ape vs Monster we not only get the creatures fighting and Eric Roberts but there is also Cold War spying, betrayals, a messed-up father daughter relationship, sexism by an army guy, and an old family friend getting squished. This movie starts off fast and never lets up. There is always something on screen to pay attention to. That breakneck pacing is what makes the movie work. Again, the key is to not let the audience think about what they are watching. Trust me if you do have your brain turned on it will ruin the movie for you.

If you like the Asylum at its best, think the first Sharknado or Lavalantula, then you will likely have fun with Ape vs Monster. It has the same shitty charm that those movies do. If on the other hand you want a serious movie with a budget… well why the hell are you watching an Asylum flick? I’ve been accused in the past of recommending bad movies and this time that assertion is correct. Check out Ape vs Monster in all of it cheesy terrible glory!

Posted by Gutmunchers Lives at 8:50 AM