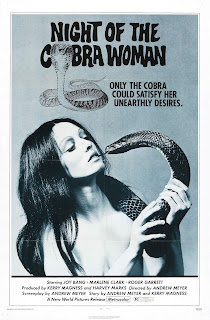 I found another shot in the Philippines movie to review here for the website. This one kicks off with some nurses looking for plants to help their patients. This must happen during World War II since a Japanese soldier shows up and rapes one of them, leaving her for dead. Luckily the other, Lena, went into a nearby cave and was bitten by a snake. One that just so happened to be a God! That allows her to save her friend because you know… snake magic!

The action then jumps forward to “today” being the early seventies when this was made. There is an American student in Manilla studying antivenom and she decides that she must find the legendary Firebrand cobra. That leads her to a still young Lena and all sorts of shenanigans ensue. When Joanna, the American girl, tells her boyfriend about her search he heads out to see Lena. That is a bad idea because not only is he bitten by a cobra, but Lena then falls in love with him. This is unfortunate since she isn’t kind to her lovers, draining them of their “years” and leaving them old men. Luckily, snake venom will temporarily reverse the process. This all leads to a big showdown where I think evil wins. Yeah, it really does.

This is a low budget cheesy drive-in movie that is silly in all the best ways. The story is a bit confusing at times but serves the purpose of getting Lena her victims while providing an excuse for her to disrobe. Most importantly is the plot is tight and there is always something interesting happening on screen. You will not be bored by this movie. The acting is passable, and the cast are trying their best with what is a silly idea. Speaking of actors, I absolutely love Vic Diaz in this movie. He plays a dual role as the hunchbacked child born of the rape as well as the Japanese soldier who fathered him. Neither role has any dialogue, but he excels as Lope, the hunchback, hopping and squealing thru his scenes. Seriously this dude is a treasure of the drive-in genre. I also did a double take when I recognized actress Joy Bang in the role of Joanna. She was in one of my favorites Messiah of Evil the following year. She didn’t work a lot seeming to retire in the early seventies, so it was neat to see her show up here.

The makeup effects are goofy looking though all the skin peeling did creep me out. Though that might just be a personal hang up. Unfortunately, the rest of the gore is real. There are cock fights, an eagle killing a snake, and another snake getting chopped up. I’m not terribly squeamish myself having grown up hunting but it sucks seeing animals killed for the purposes of entertainment. It didn’t spoil the movie for me as this was common in the Philippines and part of the culture, but it did bug me. If you are sensitive to that sort of thing, be warned.

I like this movie. It checks a lot of those must have drive-in movie boxes. A small cast doing their best. Just a couple locations for most of the shoot. Special effects on a low budget. And an attitude of just going for it. This isn’t a perfect flick at all, but Night to the Cobra Woman does have its moments. I recommend checking it out.