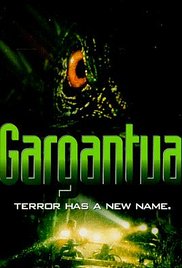 Remember that awful Matthew Broderick Godzilla flick? Well, it was a big deal before it came out so of course someone decided to make a mockbuster for the Sci-Fi channel. Here we have Adam Baldwin horribly miscast as a marine biologist who just happens to be on a Polynesian island when an earthquake changes the underwater terrain and redirects the path of some giant lizard monsters who stroll up on the beach and start eating the locals. His son also befriends a baby which is what the big ones are looking for. Additionally, we have some local fishermen who are mad that they can’t go fishing, as well as a reporter and doctor who all interact with Baldwin’s science guy. Because you can’t have enough characters, we get another scientist on the island investigating stuff and they become science bros and take a sub down to do science. There they find pollution from old, rusted drums of pesticide that I think maybe mutated the giant lizard things because… science?

Clearly this isn’t a very good movie. The plot is clunky and familiar without bringing anything new. I’m okay with that as the familiar is nice sometimes. What did bug me was the glacial pacing. We get too many useless scenes that don’t move things along. The entire subplot of the kid, played by a very young Emile Hirsch, befriending the small monster has a very Gadzookie feel to it, but not in a fun way. This entire plot is sort of useless except as an explanation why the bigger lizard monsters follow them out into the ocean. This itself leads to an ending that really isn’t an ending. They lead the monsters back into the ocean and away from the island. Okay so what happens next? Do the many dead folks not get avenged at all? Sure, one of the monsters is dead… but damn it! 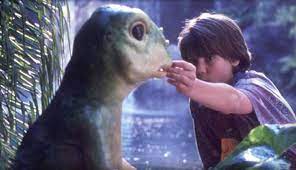 I’m a big fan of Adam Baldwin but he is totally wrong for this part. While I’m not sure he was helped by the dialogue and silly story I don’t think under the best of circumstances I could have bought him as a scientist. I’m pretty sure he was cast because people recognized him from Independence Day. He tries his best but this miscasting hurts the movie badly.

The various creatures are brought to the screen using some old school tricks including forced perspective and an awesomely bad rubber puppet. Really, I loved the creature appliance they created. It isn’t good but I have a soft spot for such things. But they do screw the pooch with some downright terrible CGI, even by made for television late nineties standards. Just about the time I was liking what they were doing they blew it with some terrible digital effect. That was frustrating.

In the end this is a harmless and not good cash in on an equally disappointing Godzilla movie. It is very cheesy and throws a lot of things at the audience, most of which don’t stick. I won’t hate on this too much because it is what it was supposed to be. Utterly forgettable and an easy way to kill ninety minutes while turning your brain off. While that isn’t a recommendation it is the best thing, I can say about Gargantua.

Posted by Gutmunchers Lives at 8:57 AM