Bubba and the Cosmic Bloodsuckers by Joe R. Lansdale

This is the follow up… well actually it is the prequel to Lansdale’s excellent Bubba Ho-Tep. Yes, it was a book before it was a movie. I’m not going to go into much detail about that story other to say that if you have read it, I think you will enjoy the references and blanks that Lansdale fills in here. If you haven’t then they will go right over your head but won’t confuse you or take away from enjoying this one.

Elvis Presley wasn’t just the king of rock in roll but was also a monster hunter. At least in this alternate universe penned by Lansdale. The things that go bump in the night are drawn to those who are charismatic and there is a secret organization that recruits those people to fight the monsters that come calling. This is how Elvis ends up on the team that is sent to New Orleans to fight some interdimensional beings that have crept into our universe to feed on those unlucky enough to cross their path. The fact that the hole they are using happens to be at a junkyard where Elvis shot a movie is just a coincidence or is it? People get mangled, ghosts get laid, universes visited, and eventually a vintage Cadillac saves the day. Well at least the back seat full of explosives do!

I enjoyed Bubba and the Cosmic Bloodsuckers quite a bit. It is short, much like Bubba Ho-Tep, being more of a novella or short story than it is a book. But that makes it a quick and fun read so no complaints here. Lansdale does a wonderful job of creating some strange monsters that are Lovecraftian in their design and origin. These bloodsuckers aren’t just vampires but are otherworldly and alien, folding their victims up into balls to feed on at their leisure. He really does the horror well. 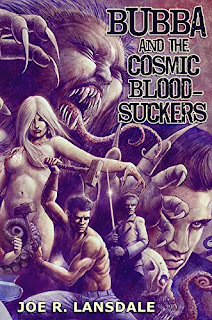 The non-monster stuff is just as engaging. The characters are well drawn and the situations they get put in are at times very funny. The entire story is irreverent and right in line with the sorts of off kilter tales that Lansdale is known for. Honestly if you haven’t read any of his stuff before you should correct that. His short stories are fantastic. Here he continues to develop his fictional Elvis expanding on the character we got to know in Bubba Ho-Tep which takes place much later in his life. I was interested in how he was going to explain him not remembering his monster hunting days in that other story, but I was happy with the explanation. It also sort of explains why he was so readily accepting of the events there as well.

My one negative observation about Bubba and the Cosmic Bloodsuckers it would be that it doesn’t quite rise to the level of the story it follows. Is it fair to compare this to Bubba Ho-Tep? I think so. The idea doesn’t seem so original here given that this is the second bite at the apple. I also thought that the story did seem a bit rushed, especially the resolution. That said this is still a very fun read and probably unlike anything else that most of you have seen before. For maximum enjoyment I’d recommend reading this first and thing tracking down a copy of Bubba Ho-Tep. You might miss some of the references, but I think the story will play better.

The ending of Cosmic Bloodsuckers leaves it open for more stories set in this world. Other famous people are mentioned, and I don’t know if that was just for fun or if Lansdale is planning to hit us up with more stories in this universe. I hope so. Until then I highly recommend this book.