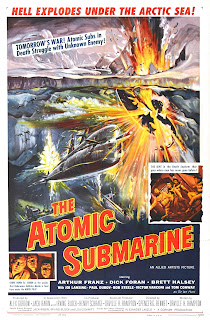 This movie is set in a far distant future of I think the seventies where travel under the north pole is common. That travel is by nuclear submarine, including commercial passenger ships. Suddenly various submarines are disappearing, believed to be sunk. The pole is shut down and a special submarine, The Tiger Shark, is sent to discover what is going on. We know all of this because of some helpful voiceovers, a spinning newspaper, and stock footage of stuff sinking.

The submarine goes to the pole and starts poking around. There is some drama in the crew as a couple people don’t like each other. We get lots of science talk before they finally see that it is a UFO only underwater. There is some talk of it being powered by magnetism which is why it keeps returning to the north pole. They set a trap and end up ramming the ship, only they get stuck. Boarding it some people get killed and they meet a giant eye stalk alien thing that tells them it is going to come back with its buddies to invade. Luckily, they have a rocket that shoots it down when it takes off. Cool…

This isn’t a very good movie. It has an interesting premise setting the typical Alien invasion flick underwater. I even liked the idea that it had to happen at the north pole so that the ship could keep recharging itself. But the filmmakers execute it poorly. The story moves along at a glacial pace with nothing happening until the last ten of fifteen minutes. The payoff with the alien is cool and the special effects for both it and the model work used on the underwater sub scenes are solid. But there are way too many scenes of actors sitting around a table talking about doing stuff rather than doing it.

None of the above is helped with what I’ve come to realize is an immediate red flag. What we have here is a series of disconnected shots of actors speaking to each other with not one but three annoyingly cheap cheats to connect them. First, we have the narrator popping up to tell us that they waited for a week or cruised around under the pole for a month. Not one character mentions that fact so it wouldn’t surprise me if that was added in later. I would have liked dialogue explaining their frustration. Something other than a disembodied voice talking at me.

We also get the old spinning newspaper dropping headlines on us. And we also watch a hand write in the ships log telling us of their plans. Most of the last two are accompanied by the narrator. All of this leads to a movie that feels disjointed and sort of glued together by the editor rather than one that had a script and a director that knew what was going on. That kills the pacing and leads to the issues I mentioned above.

When I first sat down to watch The Atomic Submarine, I was excited. It has a cool cast including a young Brett Halsey, who most of us would recognize for his later work with Lucio Fulci. There is also an appearance by the beautiful Joi Lansing, the always funny Sid Melton, and Tom Conway. That last name might not be familiar to you, but he did a lot of mystery flicks in the forties that I love and was an excellent actor. There was a ton of talent here that was wasted by a lackluster script.

This one is only for the hardcore fans of science fiction and fifties movies. Even then I can’t see it being worth more than a single watch. For everyone else I recommend avoiding it. his is a bummer because I wanted to like The Atomic Submarine.

Posted by Gutmunchers Lives at 2:06 AM