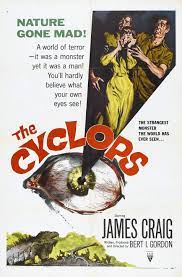 This bit of sci-fi horror from the fifties introduces us to a woman named Susan who is looking for her lost fiancé Bruce. He disappeared in a plane crash three years prior, but she hasn’t given up hope. Along with her are a hired pilot named Lee, a friend named Russ, and a businessman named Marty who tagged along while paying some of the expenses. Marty is looking for some uranium to stake a claim too, while the others are looking for Bruce. This becomes important later on.

Their plane is forced to land in some forbidden territory that the local authorities refused them permission to search. They quickly realize that the area is heavily irradiated, which makes Marty happy. But Susan doesn’t care and insists that they keep looking for Bruce. They find him but along the way realize that the radiation has caused all of the local critters to grow very large. This includes Bruce who looks like he was banged up really bad in the crash. Stuff happens and they eventually make their escape.

This is a straightforward creature movie from director Bert I. Gordon. We get giant lizards, a giant mouse, a giant hawk, a giant spider, a giant snake, and of course a giant Bruce. These are brought to the screen with a combination of old movie tricks. Composite shots are stitched together with rear projection to make it look like the actors are interacting with the oversized critters. While far from Gordon’s best work this isn’t too terrible. You do see on more than one occasion the creatures become transparent, but that is normal for the techniques that they were using. For a movie that is over sixty years old it isn’t too bad. 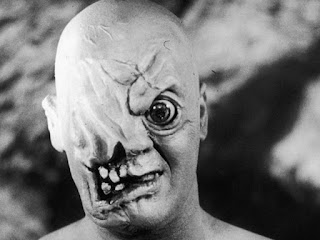 I normally talk about the plot first but that isn’t why you watch a Bert I. Gordon movie. Still lets briefly take a look at it. The movie is very short, clocking in at barely over an hour with a running time of sixty-six minutes. That is a wise decision because there isn’t much to the story. They get told they can’t fly somewhere, they do anyway, Marty freaks out and the plane lands. Then giant monsters happen, someone does something stupid, and they fly away. See not much to it, but it does adhere to the “B” monster movie tropes. Again, you watch a movie like this to see the oversized assorted threats to the cast rather than an engaging story and/or interesting characters.

Despite not having much of a story they do have a fairly strong cast. The highlight for me is Lon Chaney Jr. as the businessman Marty. He does some inexplicably dumb things, but I blame the script and not the actor for that. It was also cool to see Gloria Talbott who I recognized from I Married a Monster from Outer Space. Tom Drake who plays the pilot Lee did a bunch of television, including one of my favorite Kolchak episodes. Most everyone in this movie were working actors and do a good job.

I like these cheesy fifties flicks. I know that they aren’t for everyone and I think that you have to be a fan of these to get a kick out of The Cyclops. Silly and gimmicky this was right up my alley but may not be up yours. With that caveat I recommend this one.