Dawn of the Dead by George Romero and Susanna Sparrow

Dawn of the Dead is my favorite movie and Romero is my favorite filmmaker. That statement shouldn’t come as a surprise to anyone who reads my reviews here at Crappy Movie Reviews. I’m a huge nerd when it comes to the maestro of zombies. I’ve had an original copy of the book for many years but was afraid to crack it open. I just like looking at it in the hermetically sealed acid free package I have it safely tucked away in. Yeah, I know it is obsessive. When I was on my road trip to Evans City, check out the link here, I found that it had been reprinted and snapped up a copy. Finally, I felt comfortable in diving into the novelization of my favorite movie.

Just in case you haven’t seen the movie I’ll give a brief recap. The world is falling apart as the zombies are overrunning everything. It doesn’t help that instead of banding together the people are fighting with each other. Society is going down the tubes quickly, so Stephen and Fran decide to get out of Philadelphia before it is too late. They work together at a local television station with Stephen serving as the helicopter pilot. They plan on taking the chopper and with Stephen’s friend Roger making a break for it. Roger is a S.W.A.T. officer and before he meets up with them invites Peter to come along. The four end up landing on the roof of a Mall and talking it over as their home. Just when things seem to get peaceful and the situation under control looters show up and the thing goes all to hell again.

I’ve seen Dawn of the Dead hundreds of times and was satisfied with the book. It is an easy read that, like the movie, gets right to the good stuff without getting bogged down. At its core the story is about four people trying to survive in a world gone crazy with the dead trying to eat the living. After briefly setting up how bad it has gotten and how far the plague has spread, we get to the attack on the apartment building by the authorities. They are trying to clean out the zombies that are being kept there by the families which leads to a lot of killing. Much of it unnecessary and heavy handed. This is the first time that the reoccurring theme of human beings being the real problem is shown. 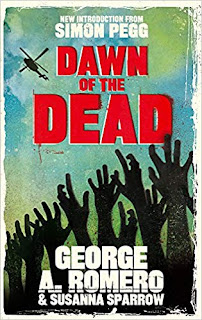 After this they make their break from the city and end up at the mall for a rest. Instead of continuing to Canada they instead decide to stick around and fall into an oddly normal domestic life for a few months. They clear out the place and basically have access to anything that they could possibly want or need. After a bit of peace, it is shattered when more people show up to wreck it all due to their greed. What is interesting is that it isn’t only the raiders/looters that are greedy but our main characters who don’t want to let what they have worked for be taken. So again, people die because of each other and not due to the zombies who could have been easily avoided. The dead are winning because the living are stupid, greedy, and selfish.

Since this is a novelization of the script for Dawn of the Dead, I thought it would be interesting to compare how it differs from the movie. The biggest change from book to movie is how long the story lingers on our surviving characters hanging out at the mall before the raiders show up. In the movie we see a lot of them talking and montages of them shopping. Stephen even proposes to Fran, which she declines, in the movie. That isn’t anywhere in the book. I’m not sure why that is different. Perhaps Romero edited the film to show more of them living their lives and therefore more character development. Ironically if you have seen the European cut of the movie it also cuts this daily life stuff out as well. I don’t think that the story suffers either way, it is just different. Personally I like getting to know the characters but I also acknowledge that is what some zombie movie fans consider the worst part of Dawn of the Dead.

The above is the only big difference. The rest I think were just due to the shooting locations that they had and some inspiration on set. For example, in the book the hideaway was hidden at the end of a hallway full of offices instead of a hallway to maintenance. That I think was due to what they had to work with at the Monroeville mall. The iconic Hari Krishna zombie doesn’t make an appearance, nor does the attack in the department store. Both of these were last minute changes due to the look of an extra (Krishna zombie) and for continuity (the department store attack).

I know that I’ve already said this but I’m going to say it again. Dawn of the Dead is my favorite movie and I’ve spent the last forty years collecting everything that I could related to it and Romero’s other movies. I’m glad that I finally found a copy I felt okay cracking open and reading. In a way it allowed me to revisit familiar territory with a slightly new twist to it. Now if they would only reprint The Zombies that ate Pittsburgh! Yeah, I have it and won’t take it out of the bag either. I did mention that I’m obsessive, didn’t I? If you like zombies, then track down a copy of Dawn of the Dead novelization.