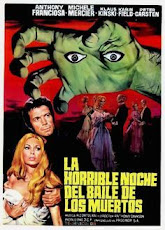 The movie opens with the great Klaus Kinski stumbling around a crypt. He finds a particular grave and then a raven caws and freaks him out. Taking a swig from the bottle he starts busting the grave open only to have the camera zoom up on his face while he screams. Then the scene moves, and we see that he was telling a rapt audience in a tavern a story. Kinski is playing Edgar Allen Poe who is visiting England and telling stories to the locals.

An American journalist named Alan Foster shows up and begins peppering Poe with questions. He has been sent to follow him and collect information for a story. This leads to Poe telling him that he doesn’t write fiction but just relates the truth. All of this leads to a bet where Foster spends the night in a nearby haunted castle to prove that there are no such things as ghosts. Soon he is dropped off with a key and told they will return at dawn. Now at this point I’m debating how much more I should give away. I will say that as the night goes on things get creepy and that the supposedly abandoned castle is surprisingly busy. But are they ghosts or something else? What happens when they arrive to pick him up at dawn? These are things that I think I’ll keep vague while trying to explain why you should watch Web of the Spider.

This is a good movie. The characters are well drawn out and the story is satisfying. We get an opening, middle, and end with a resolution that I saw coming but still liked. The cast is good with Anthony Francciosa (Death Wish II, Tenebrae) having to carry most of the story as Foster. The movie focuses on him and what he experiences in the house. So, we get characters coming and going but the only consistency is Foster. Kinski only shows up at the beginning and end but is very memorable. Often when he is in a movie he chews on the scenery but here he is a bit more subdued and does a wonderful job as Poe.

The performances probably have to do with some great direction from Antonio Margheriti (Seven Dead in a Cat’s Eye). I was also impressed with how well the old school visual effects were done. This is a haunted house flick, so I wanted some scares. From a great mirror gag, a clock that seems to tick when it wants to, and finally a camera that feels like it is spying on him all adds to the fun. The audience gets to feel like we are watching him from the eyes of some mysterious entity. This helps set the tone and sell what happens later. There are also some beautiful shots that are framed at odd angles as well as a few close ups that are just unsettling. All of this creates an unsettling visceral reaction that makes Web of the Spider a great watch.

This movie has been sitting on my to watch pile for a long time. Mostly because I’m always scared to watch a Klaus Kinski flick. When he is good, he is great, when he is bad it is awful. Here he was great, and the rest of the movie was as well. While I’ll admit there are about twenty minutes in the middle as they are setting up the story that things get a little slow, this is necessary for the ending to have any meaning. Though the rest of the movie is so much fun that this didn’t bug me at all. I highly recommend Web of the Spider.

Posted by Gutmunchers Lives at 11:00 PM