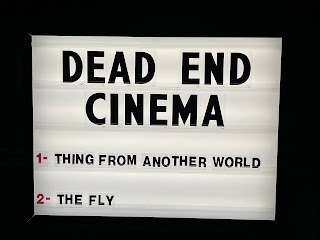 Damn it has been a long time since I was able to toss one of these Road Trip reports together. Between COVID and the time of year there wasn’t an opportunity. My good friends Mr. and Mrs. Fright announced that they were reopening their backyard drive-in. The first night was a Clint Eastwood night, but we only made it thru one flick, so I didn’t have much to talk about. But with a full double feature on night two it gave me plenty to report.

The day started off early as my buddy Sean and I had an morning event to attend. I’m nerdy in ways other than movies and was running an event for Goodman Games at our local hobby store. After that we hit up a late lunch and ran some errands before driving to the Fright estate! By the time we got there they were already setting up the screen and gear. We also had a chance to hang out and shoot the shit about movies, how much the pandemic sucked, and family drama. Mostly my family drama… long story that I’m not going to talk about here. Then it was time for some movies! 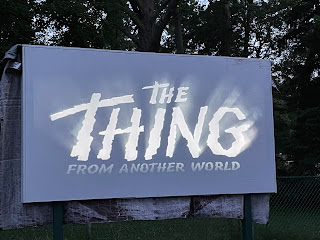 This week’s double feature was a pair of classic fifties flicks. The first up was The Thing from Another World. I’ve covered this for the site already, you can read the review here, but I’ll give a brief recap for those that haven’t seen it before. This gem stars familiar face Kenneth Tobey who showed up in a lot of science fiction and horror movies. Though most younger fans will probably recognize him as the gas station attendant that buys the smokeless ash tray in Gremlins. We also get an appearance from Marshall Dillon himself James Arness, though he is buried under the monster makeup as he is the Thing.

The story unfolds with an air force crew being summoned to an artic base to assist some scientists. It seems that a UFO has crashed nearby, and they are to assist in the recovery. That doesn’t go well, and they lose the ship, though they do find one of the passengers and bring it back to base. It thaws out and goes on a killing spree. This movie sets up the classic tropes of what many future science fiction flicks would use. The scientist blinded to danger in the pursuit of knowledge and the isolated setting that so many stories would use later. This is a fantastic flick that everyone should watch.

After a short break to get refills and use the bathroom the bottom half of the double bill started. What pairs well with The Thing from Another World? How about Vincent Price in the Fly? This is another classic that everyone must see. Price plays Francois a wealthy industrialist who tries to figure out why his sister-in-law killed his brother. They were a very happy couple, and it makes no sense. Not only does she admit to the crime but refuses to tell anyone why she did it. 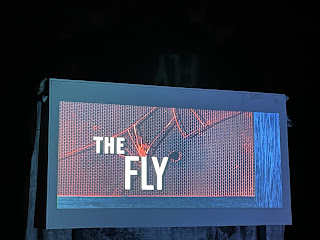 Eventually Francois tricks her into talking and he is horrified to hear that his brother was experimenting with a teleportation device when it went horribly wrong. In the process of experimenting on himself he rematerialized with the head and arm of a fly, with his head and arm buzzing away from him on the body of the fly. Obviously, things don’t go well since we know he is dead, crushed under an industrial press so that he is unrecognizable. The drama is whether they can convince the police that she is innocent, especially since all the evidence was destroyed, except for the fly that is.

This really is a must watch for anyone that considers themselves a fan of the horror genre. Hell, it has one of the most iconic scenes in movie history with human headed fly caught in a spider’s web calling out “Help me…help me”. I realize that I’ve not covered this for the website yet so keep an eye out as I’m determined to correct that.

That wrapped up the night at the Dead End Cinema and a rather successful one at that. I had a blast watching a couple of classics, talking movies with friends, and generally just getting out of the house. It still feels weird to be allowed to be around my peeps again. Before we left plans were already being made for the next event. The theme is action movies with aliens. The double feature? Predator and They Live! I’m already excited for this one. Until next time stay safe and watch some good movies.

Posted by Gutmunchers Lives at 11:04 AM