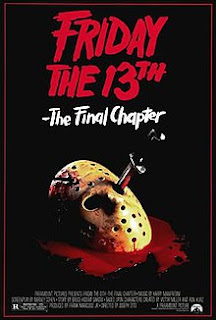 I like to wrap up these marathons with a familiar movie or dip into a franchise. I figured that I should cover this… the last Friday the 13th… the one that ends the series… yeah, we all know how that turned out. That said I’m going to cover this as if it was the last one. They did some very clever things to wrap up the franchise and I want to acknowledge that.

The movie kicks off with scenes from the first three flicks. They show some of the greatest hits aka. the best kills and reference some of the older characters. They explain about Jason’s origin and how he saw his mother killed, which apparently pushed him over the edge. Then we see the end of part III. The police have arrived and are picking up the bodies. One of those bodies is Jason who wakes up in the morgue and after dispatching a couple folks heads back to the familiar environs of the lake.

After that we are introduced to our main cast. There are a group of young people headed to a cabin to spend the weekend partying. Next door is a family including a sister, Trish, and her younger brother Tommy. Well Jason dispatches a hitchhiker and then gets to work on the kids! Oh, and the older brother of one of Jason’s earlier victims hikes his way in with a rifle. He thinks that Jason is alive since the body disappeared from the morgue and is hunting him! Shenanigans ensue with some skinny dipping, dancing, paring off, and dying going on until the final credits roll. 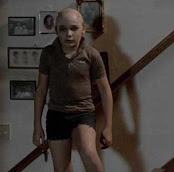 This is one of the better installments of the franchise. Again, they were thinking that this was going to be it so the greatest hits to start the movie out felt less like padding then it did remind you of why these flicks are great. It then jumps from the recap into the action. It isn’t long before Jason is tearing thru the cast of this movie. Final Chapter might have the best pacing of the Friday movies since the original. They do a decent job of introducing the characters quickly and getting to the good stuff.

What is the good stuff? Well, the boobs and blood of course. There is a lot of nudity in this flick. Yeah, I know that sounds creepy but as I’ve stated in my other slasher reviews that is part of the formula, like it or not. They spread these scenes out with the gore to keep the action moving along briskly with something interesting and eye catching happening at almost all times. We also get the infamous Crispin Glover dance that once you have seen you can’t ever forget. A young Corey Feldman plays Tommy and does a great job portraying the monster kid who doesn’t run away but instead plays psychological games with Jason to save his sister. I know that if you haven’t seen the movie that sounds weird, and it is, but it works.

Because this was going to be the last one effects maestro Tom Savini returned to finally kill Jason off. And boy howdy does he! Jason ends up sliding slowly face first down a machete blade leaving no doubt that he wasn’t going to survive this. And technically I suppose despite returning, sort of, in another seven sequels he did die here. We also get some stellar kills/gore throughout. A neck gets sawed, heads get twisted, cleaver to the face, several stabbings thru people, someone gets tossed out of a window, a spike thru the ear, and my favorite an axe to the chest. This is a bloody movie and is a great example of Savini in his prime.

I don’t know what else I can say about this movie that hasn’t already been discussed. If you haven’t seen Final Chapter you need to. Even if you haven’t seen another Friday the 13th flick that is okay. This one stands alone and again recaps things so that you get the gist of what is going on. While not my favorite slasher, or even my favorite Friday the 13th movie I can’t think of a better executed example of the formula that made for a great “kids go in the woods and get dead” movie. I highly recommend it.