The Demon Crown by James Rollins

I read a lot of books that don’t fit nor get covered here at the site. The Sigma Force series is one of those that really doesn’t fit. That is until I read The Demon Crown, which is filled with the normal globe-trotting adventure stuff but also has a horrifying plot that got under my skin.

We are introduced, or re-introduced if you are familiar with the series, to our cast of characters quickly. There are a lot of them but basically, they break down into a couple of teams. There is a group centered around spy couple Seichan and Gray. They are at the end of a long vacation and are present in Hawaii during an eco-terror attack. A swarm of huge wasps are unleashed on the islands and go on a rampage. Soon they are on the trail of those responsible for the attack which has its origins in the Second World War as well as an organization called the Guild.

The second group is made of other agents, lead again by a couple, Kat and Monk. Very quickly they realize that the wasps that attacked Hawaii have an unexpected connection to the Smithsonian and American history. This leads them to follow the journey of the man who donated his money and collection to create the Smithsonian, James Smithson. One of the items in his collection or at least one that eventually was recovered, is the key to the mystery and hopefully can provide a solution to the plague of the wasps.

The idea with this story is that the wasps do what they normally do. They lay eggs in living victims who then give birth to the next generation. See where the horror comes from? Our characters are in a race to find a solution before all the people and animals infected by the nasty bugs sudden burst and fill the air with more! Rollins hammers away at this idea with the character of Seichan, who is infected and whom we follow as she works with the others to solve it. This includes some spots where it is explained what is going to happen to her at each phase, the final one being the critters burrowing into bone. This freaked me out, but in the good way that horror fans can understand. 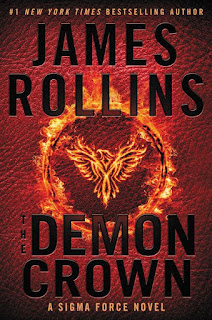 Some other observations. The pacing of the story is perfect as there is always something going on to move things further down the plot arc. The action plays out nicely and I thought that the mystery they had to unravel was also compelling. Tying the fictional in with the historical is something that Rollins has done quite a bit in this series and has become very good at it. The idea that the events laid out here have their beginnings in the early eighteen hundreds and also reference the Second World War and the attack on Pearl Harbor was a nice touch. I’m a history nerd and love when this is pulled off well.

I was surprised that this far into the series, I think Demon Crown is the thirteenth book, that Rollins was able to write something that is accessible to a new reader. If you picked this book up without knowing of the others it would still make sense. The references are kept to a minimum and in the case of the reoccurring characters the author spends just enough time fleshing them out without boring those not new to the franchise. Don’t be scared off from The Demon Crown because it is part of such a long series.

This is an excellent read that I highly recommend. If you are interested in reading the entire series the place to start is with Sandstorm, another great book. Give this or really any of Rollins’ other books a chance. You won’t be disappointed.

Posted by Gutmunchers Lives at 4:28 PM