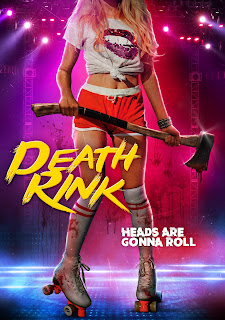 I have another newer slasher movie to cover here in the marathon. This one has a group of kids staying late to close a roller-skating rink. They combine this task with an impromptu birthday party for one of the girls who works there. As an added bit of fun, we also see the manager dealing with a heavy breather who keeps calling and yelling “SATAN” over and over again. I guess they have a stalker. This becomes important later when someone gets into the rink and starts to murder the hell out of everyone. See what I did there? The bodies drop and the blood flows… a little bit anyways, until all is revealed.

There is a lot to like with Death Rink. The setting is great and very creepy. The closed skating rink works with the story as it is spooky and big enough to hide the killings or more specifically the bodies. This is also a very good job of the filmmaker, Daniel Zubiate, to pick a single location where he can shoot and control things better. Far too many independent directors make the fatal mistake of aiming over their budget with locations they can’t afford or simply don’t have.  Here the location is perfect. It also allows the movie to have a nostalgic feel to it without trying to pick a specific decade in which it takes place. We see a Blockbuster card and a payphone, but at least one of the characters has a cell phone. It feels like an older movie without trying too hard. Then again I grew up in the seventies at roller rinks so they always remind me of my misspent youth.

The movie is very talky, but that is okay with me. The dialogue is very well written, and the cast is decent. When they are sitting and shooting the breeze it feels natural. Even the horndog character that these flicks always have is well defined and portrayed. I know that I’ve been beating on this same dead horse, but this movie proves my point. The one thing not impacted by your budget is the quality of your script. Zubiate, who is also the writer, knows how to write dialogue and picked some good actors to deliver it. 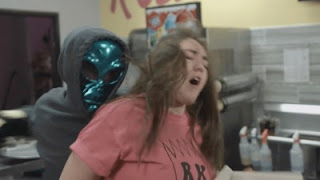 There are some decent budget kills here. The first kill is bad and shot poorly with an actress that doesn’t look distressed while being choked out with a telephone cord. But there is a fun gag with a pizza cutter and a decent stabbing. My favorite kill is a clever bit with a traffic cone being jammed on someone’s head before they get stomped. This kill is sold very well with some blood and sound effects. You think you see a head get smashed but it is only implied. Good job movie!

I have one huge problem that prevents me from recommending the movie. The pacing is all out of whack. At its core this movie is a slasher flick. There is a formula for such things, most importantly you space the kills out every ten or fifteen minutes. I know that sounds picky, but this is the formula because it works. While this movie is a very tight hour and fourteen minutes it takes almost forty-five of those minutes before the killer gets to work. They pack all the kills into the last half hour. Because of that the whole thing feels backloaded and uneven. That might seem like a nitpick, but it makes a huge difference. I found myself wondering if this was going to be some sort of switcheroo and we get to the end to find out there wasn’t a killer, and everyone just goes home.

I really wanted to like Death Rink. There have been a lot of these retro slashers come out in the last few years and other than Final Girls this might be the best. But it doesn’t quite get there for me. Still, I like the director and can’t wait to see what he does next. There is not only a love for the genre in his work, but he clearly has talent as well. This is an odd review because it sounds so positive for a movie that I can’t recommend. But that is how I feel so I suppose this is what you get. If you want to support this filmmaker and rent/purchase Death Rink to do so that is okay. Again I want to encourage filmmakers like this to keep making movies and sometimes that means spending money on something that isn’t perfect or doesn’t work.

Posted by Gutmunchers Lives at 1:22 PM