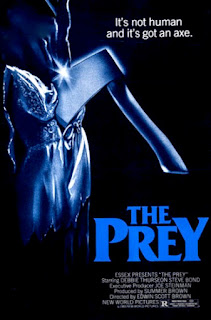 The slasher marathon continues with this one. I’ve seen The Prey before, but it has been years. If I remember correctly, it wasn’t very good. That is probably why I have forgotten about the movie though I thought with it being a slasher flick it belonged here. With that in mind I’m ready to give the movie another shot, so without further delay lets dive in.

Before and during the credits we are treated to the sights and sounds of a forest fire. Then we meet a middle-aged couple camping in the woods. The wife wanders off to the river to do the dishes while he chops at some branches. Well, that doesn’t end well for them as they both find themselves dead at the hands of an unseen killer. Then we are introduced to our main cast of characters. A van full of three couples, all of them annoying, and all of them doomed. Okay, maybe not all…

The campers go into the woods, end up at the same campsite as the couple from earlier and begin to meet their various demises. We also have some Park Rangers who have some suspicions when the couple from earlier in the movie is reported missing. The younger of the two heads up to the area where our characters are being picked off to check on them. We also get a bit of backstory from the older Ranger who talks about the big fire fifteen years earlier and how it wiped out a bunch of Gypsies. Many people die and we get a resolution, sort of. I won’t spoil the ending other than to say it is disturbing.

This movie suffers from not having a well fleshed out script and/or story. The setup with the deep woods and the burnt backwoods killer is decent if not terribly original. This is completely serviceable and should have made for a decent setup. But after the great opening with a pair of kills we go almost forty minutes before anything else other than walking and talking happens. Now some of that is establishing the characters and setting the mood for what is to come. I appreciate that and will say it is well done. But it goes on far too long.

There are also additions to extend the runtime with a couple random dude playing the banjo scenes. I’m not kidding here. For no reason there is a guy sitting in a cabin playing the banjo and saying nothing. No effort or attempt is made to tie him into the story at all. We also get a cameo with legendary actor Jackie Coogan as the older Park Ranger where he answers a phone and has a sandwich. There is lots of padding in this one and that is surprising since it only runs an hour and twenty minutes.

It isn’t all bad with the Prey. I loved the music and the fact that they used a lot of ambient sound to establish the setting of the deep woods. It reminds me of my favorite backwoods’ slasher flick, Just Before Dawn, which is a great movie. They also use random inserts of critters killing and eating prey, which I think was to set the tone for what the killer was doing to our characters. While he isn’t a cannibal, but he does have something he wants from them. Again, not going to spoil things.

There are also a decent number of kills with eight. We get some tame stuff like a smothering, a fall, and someone choked to death. But there are also some fun gags with a head getting cut off, though to be fair this is seen after the fact. Additionally, we get a snapped neck and a throat ripped out. Combined with the look of the killer, which sadly doesn’t get much screen time, I’m sold on the special effects work here. Though considering John Carl Buechler is responsible that shouldn’t be a surprise. He always did good work on a low budget.

I wish that I could recommend The Prey as I really wanted to like it despite my previous experience. And as I’ve mentioned above the movie does have some highlights. But in the end, it isn’t very good as a whole. The pacing basically killed he experience for me. I’ll not be watching this again anytime soon. That said if you are looking for a slasher from the eighties and have visited all the usual suspects this might be an okay onetime watch. That is about the best I can say for The Prey.