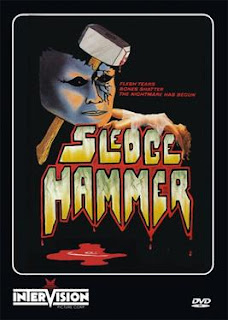 In a previous slasher marathon, I covered David A. Prior’s Killer Workout so I thought it was about time to take a look at his first movie Sledgehammer. This shot on video slasher was done with minimal locations and a tiny budget. So how did it turn out? Let’s dive in.

The movie opens with a lady locking her son in a closet while she has some fun with her lover. She has just left her husband and after some awkward attempts at romance a killer shows up and bashes their heads in with a sledgehammer. See where the title comes from? Ten years later some “kids” show up to party at the house. I used parenthesis because I’m not sure how old they are supposed to be. They act like dumb teenagers, but clearly aren’t that young. After some shenanigans, including a séance, a mysterious killer appears and starts to kill them as well. Who is the killer, and does it have anything to do with the events of a decade earlier? Well, I’m going to tell you so stick around.

Let me get some things out of the way right at the start. The acting is bad, but not any worse than I would expect from a low budget shot on video movie. But no one is going to win any awards with their performances. For most of the cast this is their only or one of two credits. That isn’t surprising at all. The pacing is atrocious with long stretches of nothing happening. It takes far too long to get back to the kills after the first couple. Between them we have a lot of slow motion and establishing shots that linger way too long. Truthfully this movie can be very boring and I can’t deny that. 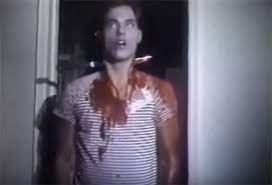 Now that I’ve said that and somewhat warned you the reader, I have to be honest and say that I sort of enjoy Sledgehammer. There is a certain charm to the do-it-yourself special effects work that are featured. We get a respectable seven kills including a sledgehammer to the noggin’, a neck snapping, and a hammer to the chest. Though my personal favorite is a knife thru the neck. None of these rises to the level of Tom Savini or Rob Bottin but for this kind of movie they look damn good, and I appreciate that.

It’s also amazing to me that this entire movie was shot in a small apartment. If you didn’t know that you would likely think they were shooting the interior of the large house in the establishing shots. Somehow director David A. Prior managed to redress and point the camera creatively so that the viewer would realize that. Whenever a filmmaker can creatively hide their low budget or limitations it gets my attention. That is extremely cool and shows the skill that would be evident in Prior’s later career.

I watch a lot of low budget movies and have for years. Hell, I rented Sledgehammer back in the Mom and Pop VHS store days. This movie is flawed, and I know that. I’ve already acknowledged many of them earlier in this review. Maybe it is nostalgia, or my love of slasher movies. Regardless I do really like this one. Can I recommend it? Well, I suppose if you have read the review and are still interested then check it out. If not, you will probably want to pass.

Posted by Gutmunchers Lives at 5:10 PM