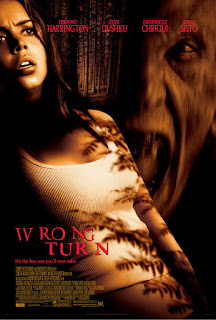 I struggled with whether I should put Wrong Turn into the slasher movie marathon. An argument can be made that it doesn’t follow the formula and is more of a Hills Have Eyes type of flick. But then again it does have a Just Before Dawn vibe. I might overthink these things… In the end I decided to include it in this year’s marathon so let us dive right into the plot.

After watching a couple of rock climbers meet a grisly fate we are introduced to Chris, a newly minted doctor on his way to a job interview a week after the rock climbers are killed. Due to a traffic jam he decides to take some backroads and ends up running into the other characters, literally. His vintage Mustang is trashed when he rear ends an SUV that was stopped in the middle of the road due to some tire damage. Damage we soon find out was caused by some barbed wire on the road. Staring off ominous, aren’t we?

No one is hurt in the accident, so they head off in search of help leaving a couple at the cars to keep an eye on things. First thing that happens is that couple is picked off by some unseen killer or killers. The rest of them end up at a shack in the woods that is disgusting and freaky. There is a container of something in the fridge that the doctor realizes is bad, but before they can leave the owners come home. Here is where we meet our cannibal inbred mutant hillbillies. Some bodies are butchered, there is a big chase thru the woods, arrows are shot, heads are lopped off, and basically a good time is had.

I had forgotten how much I enjoyed this movie. While far from perfect Wrong Turn has enough going for it that it is a solid horror flick. The story is paced well and the movie clocks in at a tight eighty-four minutes. This makes for a very entertaining experience where there is always something interesting happening on screen. This is the case even before the killers show up! While the character are being introduced, they are simultaneously setting up the environment and creating a spooky atmosphere. Having grown up in the country I know how creepy the woods can be and they capture that nicely.

When I sit down to watch a movie like this, I want to enjoy the special effects work. We get a respectable seven kills in the movie with most of them being onscreen. If I have one complaint about Wrong Turn it is the use of CGI to bring the kills to the audience. We do get some decent practical effect work with a couple of arrow hits and a fun gag with barbed wire, but a majority of the most creative stuff is digital. This includes my favorite kill that involves an axe to the face and a neat gag with the life going out of a victim’s eyes. I hadn’t seen anything quite like this before and enjoyed the ingenuity of the kill, but was a bit bummed it wasn’t done with practical effects work. Though I suppose I’m being a bit picky about it and should probably cut them some slack.

I have no complaints with the design of the killers. We get three different inbred mutant hillbillies and they all look great. Even without dialogue they seem to have different personalities and are a lot of fun to watch on screen. The creature design allows the actors to give a performance with just enough latex to make them look twisted without being cartoonish. These are clearly well thought out and for me are the highlight of the movie.

Wrong Turn is a good movie that unlike many of its contemporaries holds up well almost twenty years after it was released. If you want to see a “newer” slasher with an old school feel this is one of a couple that I’d recommend checking out. Stay tuned as you are going to see even more newer slasher flicks on my list this year.