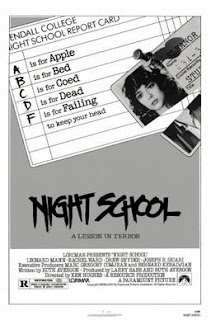 Time for me to get back to basics. Night Shift is a slasher movie that I watched back in the heyday of the eighties and honestly didn’t like all that much. But then that was on beat up VHS tape in a 4:3 aspect ratio rather than the beautiful new HD Blu-Ray. I wonder if that will make a difference. Spoilers it does!

The movie kicks off with the Boston skyline. On a personal note, in the eighties, I was living in Boston so that was sort of fun for me to recognize. We see a woman sitting with a child waiting for her to get picked up. She works at a preschool and when the kid leaves she is left all alone on the playground. That is until a leather wearing killer shows up on a motorcycle complete with a tinted faceplate. The girl is attacked, killed, and has her head cut off. Not a bad way to start a movie off.

We are then introduced to Austin, the detective assigned to the case. This isn’t the first killing where the victim has been decapitated, and it isn’t the last! More and more young ladies are found murdered with their heads lopped off and placed in water. One is an aquarium, another a sink, and yet another a bucket. What is up with that? Well Austin connects all the victims to a girl’s school and more specifically a professor Millet. He just happens to teach anthropology with a focus on primitive traditions including head hunting! Is he the killer? Did they make it that obvious? I’m not going to spoil it for you because I loved Night School this time around and don’t want to ruin the fun.

Seriously, what a difference a decent transfer can make. Not only can I now appreciate the way the movie is shot with things happening in the shadows, the way scenes are framed, and yes some of the more artistic camera work, but the sound is much better as well. I can hear the dialogue clearly and you also get some important musical cues that I think weren’t as noticeable before. This was like watching an entirely different movie. In the past I’ve always been sort of neutral towards Night School. I didn’t hate it, but it was easily ignored, and I never recommended it. That has certainly changed.

The story is fun and different. Instead of following a bunch of kids getting picked off we get a lot of adult characters like Austin and Millet. The police are involved and there is more of a mystery here than just a line them up and mow them down scenario. We do get a decent number of kills with five characters meeting their end. Though be warned that most of these are offscreen and those that aren’t end up bloodless. The best part is a couple of severed heads. If you are looking for a gorefest this isn’t it. Paced well I was never bored with what I was watching and enjoyed the characters and their interactions with each other. This is a well-acted and written movie. The story also has a decent twist ending as well as another sort of funny one tacked on at the end.

In some ways this almost plays like a tamer Giallo with the killer in black, including black gloves. The subplot of the professor and his many lovers also is very important and adds that bit of sleaze that is very familiar to fans of the genre. Heck the detective and his sidekick comic relieve also would fit nicely in a Giallo. Then again, this movie makes at least one big reference to slasher movies. Early on the cops visit a peeping Tom that they suspect as the killer and placed prominently in the scene is a hockey mask. I’ve always considered this to be a slasher, but the argument could be made that it belongs in this other category.

This is a fun movie. There is the required nudity, enough kills, a couple severed heads on screen, and a mysterious killer. I also liked the connection between the murders and headhunting which gave Night School a neat spin. I was disappointed by the lack of gore, but that is my only complaint. I recommend that people check this one out. Just make sure to find the Blu-Ray in HD.

Posted by Gutmunchers Lives at 9:01 AM