This is the second book that I’ve reviewed here at the website from prolific author Johnstone who was better known for his westerns. I mention that again because I feel like some of that traditional cowboy storytelling found itself into this supernatural horror tale. More on that later.

The story takes place in a small Louisiana town and involves an ancient family of Satan worshipping werewolves and witches. A few decades earlier the locals found and killed one of the men of the family who was afflicted with the werewolf curse. His elderly wife, who is a powerful witch, has waited until the time was right to return to get revenge on the descendants of those that killed her husband. This involves bringing her werewolf relatives back to life as well as turning her victims into zombies to do her bidding. All of this is overseen by Satan himself, who apparently lives in the swamp nearby.

The granddaughter of the evil witch lady is somehow ignorant and innocent of this family curse. She ends up hooking up with a mercenary that was chosen by God to do battle with Satan. The mercenary quickly goes from “this is all bullshit” to “hey Satan how goes it?” Being the chosen one he does what a mercenary/soldier/hero does and takes the fight to them. This all leads to an abrupt and forced ending that clearly was meant to set the rest of the series up. And yes, there are many more books in this series. 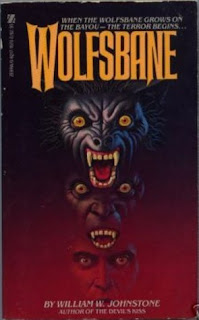 I don’t think that I’m a Johnstone fan. While I was enjoying the other book I read from him, Bats, it didn’t stick the landing. Here I have the same problem. The story ends with our hero falling into the basement of the house and waking up five years later. The characters that were established have all either died or moved away. We are just left with our mercenary climbing out, meeting a priest that was apparently waiting for him, and getting ready for what I expect is the action in the second book. We don’t get an ending that satisfies this story but rather have a “to be continued” ending and that annoyed me.

Beyond the ending I have to say that for the most part I wasn’t fond of the story. First, we have werewolves, witches, zombies, and vampirism all mixed in with Satanism. This is a bit too much for the story to define and support. None of it is fleshed out and you get the feeling that Johnstone is sort of tossing stuff in because it is evil. Plus, the werewolves drink blood, the witch can only be killed with silver bullets, the zombies inexplicably can talk and aren’t killed with head shots. They never define the rules to the monsters in the story and that is annoying.

The story itself structurally has issues. Let’s take the zombies for example. They just sort of show up and no one is surprised by it. Some of the victims are killed and stay dead after their bodies are found. Others reanimate and stroll around… why? Also, characters go from minor and hardly defined to suddenly showing up and speaking as if they have been vital to the story all along. There were many times I had to stop and go back to try and figure out who the hell they were. That is just bad storytelling. I could give more examples of this, but I don’t feel the need to.

I know that Johnstone has a hardcore fan base who love him. Based on the two books that I’ve read from him I’m not one of them. There are so many much better written horror novels out there that I’ll not be spending any more time with this author. I can’t recommend Wolfsbane.