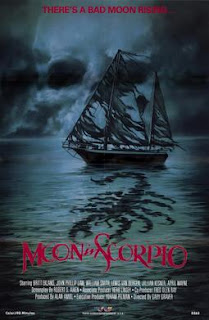 This movie has been sitting in my to watch pile for a very long time. I wasn’t sure what it was, but I did see that William Smith and Britt Ekland starred so I figured what the hell. Both have been in some great movies so how bad could this be? Well, that turned out to be a stupid question. Also, I had no idea that this was a slasher movie of sorts. One set on a sailboat.

The movie revolves around Ekland’s character Linda. She is the only survivor of a group of friends that set out on a sailboat. Now don’t get mad at me because the movie spoils this right away. Thru a series of flashbacks, though honestly at the time it isn’t clear that they are flashbacks, we see someone make their escape from the very same hospital that Linda is currently in. They stab a couple of folks and then we go back to Linda and her fiancé. She is headed on her honeymoon, not knowing that her new husband has invited his buddies from Vietnam along for the sailboat ride to Mexico.

After the mysterious figure from the hospital shows up and dispatches a fisherman, they leave harbor and head out. This leads to some drinking, arguing, sabotage, and murder! We also get a subplot of some horrible crime committed by the three during their time in Vietnam. I think they killed some villagers or something like that. We get some stock footage and poorly shot scenes with the actors walking thru what looks like a park as an explanation, so I’m not sure what exactly happened. The killer is revealed and again I think she was supposed to have known something about the crime. But then it turns out the killer was the escaped mental patient. Though the timeline is all screwy as to how they would have gotten on the boat so soon after escaping.

This movie is an absolute mess. First up they didn’t have the budget to try and do the Vietnam flashbacks, which are distractingly bad. It really does look like some guys walking in the park fighting a war. If you can’t shoot it don’t include it! I’m sure they could have just snuck that plotline in with some dialogue. Though why bother? Other than to give an excuse for some nightmares it goes nowhere. After wasting our time trying to establish it, they jump right to a random killer taking the opportunity to rip thru the cast. There is so much effort trying to talk about ghosts and establish a supernatural story that I’m thinking someone must have tried to twist this script into the still popular slasher genre. I suppose I could do some research, but this movie has already taken up too much of my time. 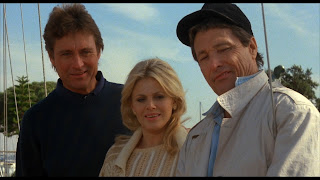 I should also mention that this movie is told out of order, but they make no effort to let you know that while you are watching. Eventually I caught on to what was going on but for a good bit of the movie it was confusing as hell. They also did a crap job towards a cohesive narrative using an annoying voiceover from Eklund to connect what seem to be random scenes together to attempt to tell the story. This is just horrible writing. What makes this even worse is the cast that is wasted on it. William Smith and Britt Eklund, I’ve already mentioned, but there is also the always solid John Phillip Law and legendary “B” actor Robert Quarry. There is some talent on this cast, and it is completely wasted with this mess of a story.

The one highlight are the kills. I thought I was in for a good time as we get a couple nice effects gags with some stabbings right away. But then there is a long pause before things pick up again. The killer starts to use a weird hook/knife weapon to murder people that I thought looked cool. But again, with the crappy writing they never explain where it came from and if it has any significance. If you are going to give your killer a weird weapon you had better let us know why that was their choice. Still there are eight kills including some stabbings, slashings, speargun to the chest, and an eye gets stabbed out. Not top-notch gore but there was some effort put into it.

Moon in Scorpio isn’t worth your time. While I like the kills this movie is boring, confusing, and just poorly made. Give me a standard set them up and knock them down at a summer camp any day over this nonsense. Stay far away from this turd.

Posted by Gutmunchers Lives at 8:27 PM