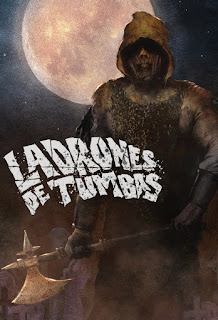 A movie like Grave Robbers is why I keep digging into stacks of stuff that I’ve never seen before. Occasionally you unearth a great flick that you haven’t seen before. Yeah, I know that this is a bit of a spoiler but damn it this was a good time!

The story opens in the past with a Satanist trying to bring about the birth of the Antichrist thru a ritual and a virgin. He is interrupted by some monks who we find out later are with the inquisition. They chase him down and toss him on the rack to confess his sins. He refuses and gets an axe in the chest for his defiance. But before he dies, he warns them that the axe will eventually be pulled out and he will return to complete his ceremony.

The action moves to present time or at least the late eighties when Grave Robbers was made. We see a group of girls going on a camping trip, one of whom is the daughter of the local police captain. There is also a truck full of grave robbers out to score some cash in the local cemetery. They of course find the body, pull the axe, and set the killer free. After retrieving his axe, which they took, he starts to chop his way thru the cast until finding the captain’s daughter who I guess must be a virgin because it is ceremony time again. The survivors head back to the cemetery to stop him before the world goes to hell… literally!

This movie is a blast. Much like his earlier flick, Cemetery of Terror, director/writer Ruben Galindo Jr. has made a movie that starts off with a bang and never lets up. The pacing is amazing and slows just long enough to establish the characters before jumping back into the mayhem. He juggles a few storylines perfectly eventually bringing them all together in the end. There are some characters that show up solely to be knocked off but being a slasher movie that is what I would expect. Oh, and unlike Cemetery of Terror which blended so many genres that I couldn’t call it a straight up slasher Grave Robbers easily falls into this category. And it is a damn good one at that!

Since this is a slasher flick, we must talk about the kills. There are an impressive twelve of them in this movie. While some are off screen, we do see some fun stuff on the screen. There is an axe to the chest, neck, and face that are all decent. Necks get snapped, faces get jammed thru metal gates, and someone even gets drowned. Though my two favorite gags are a beheading with bouncing noggin’ and a chest bursting scene that I didn’t see coming but was bloody and featured some intestines. The fact that the director did the effects himself after spending a weekend in Los Angeles working with an FX guy is amazing. Is there anything that Galindo couldn’t do?

Hell, I haven’t even gotten to the look of the killer yet, which is cool. Imagine a pissed off satanic zombie stomping around in decayed robes, and you pretty much have it. I’ve always been a sucker for the older Mexican horror movies but somehow never knew that they were shooting stuff like this in the eighties. Though it seems like it was only Galindo who was making flicks like this. Still, I’m so happy to have seen this. I know he has a third flick called Don’t Panic that was shot between Cemetery of Terror and Grave Robbers. I must track down a copy of that as soon as possible. If it isn’t clear yet I’m highly recommending Grave Robbers. This is one of my favorite new to me movies of the year!

Posted by Gutmunchers Lives at 4:44 PM