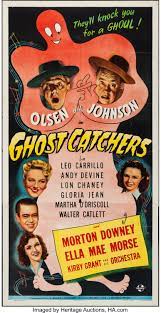 I’m a huge Abbott and Costello fan so I’m always interested in checking out other studios attempts at creating their own comedy duos to cash in on the popularity of the pair’s movies. I’ve covered some of those here at the site already and Ghost Catchers is another of them. Though I just now realized that I’ve never covered Abbott and Costello here. I’m going to have to fix that oversight soon.

A southern gentleman has arrived in New York City with his two lovely and talented daughters who are about to put their debut concert at Carnegie Hall. They sign a lease on a mansion that is supposedly haunted and sure enough the first night some spooky stuff goes down. The oldest daughter, Susanna, runs next door for help and ends up in the middle of a night club act with the comedy duo Olsen and Johnson. After a misunderstanding and an extended bit of singing and dancing the boys eventually come next door to sort things out.

What is going on? Well, there is a ghost, who they chase away with loud music. Then there are gangsters in the basement stealing a million dollars of booze from a hidden cellar. But then the ghost comes back to save the day when they are walled up Edgar Allen Poe style after the crooks catch them. Making their escape thru the wall into the club there are some more shenanigans and even more singing and dancing. Then the credits roll.

I wanted to like this movie, but it falls into the trap that many of these knock offs do. The comedy isn’t that good. I know that Olsen and Johnson did a few movies together, but they aren’t that funny. All their gags are “borrowed” from much better performers and that sort of recycling was annoying. This is especially obvious when they mention Abbott and Costello by name and even reference Hold that Ghost which this movie is obviously trying to copy. They do their own take on the famous candle gag from that one and trust me it isn’t good. I’ve said this many times before and it continues to be true. Don’t reference a much better movie that I’d rather be watching.

The pacing is off as we get way more musical numbers then we do comedic stuff. The supposed stars Olsen and Johnson feel more like supporting actors then they do leads. I was excited to see Lon Chaney Jr. and Tor Johnson in the credits, but they are hardly in the movie. Johnson is unrecognizable and Chaney Jr. is wasted as a nameless thug. You had a perfectly good villain and instead we get a generic forgettable bad guy. I mean Chaney Jr. had already done several legit horror flicks at this point for Universal so what is up with that? Then again did we even need the gangster stuff if you were going to do the ghost story? The filmmakers really needed to make up their mind.

This is a hastily put together cash in on a trend that is such a pale imitation of what inspired it that I can’t recommend it. Want to watch a great movie with the same plot filled with a genuinely funny comedy team? Watch Abbott and Costello’s Hold that Ghost.