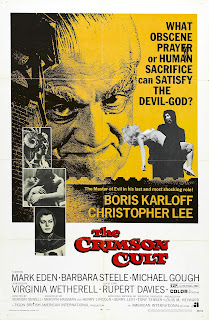 I pride myself on being a horror nerd but occasionally I stumble over a movie that has somehow escaped my attention. The Crimson Cult aka. Curse of the Crimson Altar is one of these. The cast includes Christopher Lee, Barbara Steele, Michael Gough, and Boris Karloff! Seriously how did I miss this one? Well one order to Kino Lorber and I have the Blu-Ray in my hands.

After a trippy set of scenes with a naked woman being whipped and Barbara Steele sitting around covered in some odd blue makeup, we meet our protagonist. Our story follows Robert Manning as he goes looking for his missing brother Peter. It seems that they are in the antique business and Peter was out looking for things to buy. After Robert gets a note pointing him towards a small town he jumps in his convertible and goes looking for his overdue sibling. One that we realize was part of that psychedelic opening scene.

When Robert arrives at the country estate where his brother was last seen he ends up in the middle of a happening party with lots of body painting, booze, and half naked ladies. Here he meets Eve who takes him to see her uncle Morley (Lee’s character). They claim that his brother never stayed at the house but not long after accepting an invitation to stay the night he finds a candlestick that matches one his brother included with the note. The rest of the movie is Robert trying to figure out what happened to Peter, dealing with the locals, and trying to bed Eve. Spoilers he does! 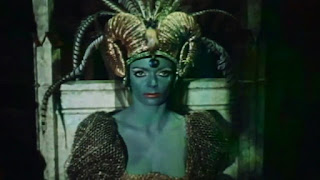 This is not a good movie, and I can see why I’ve never seen it pop up on my radar before. The story is uneven with several painfully slow spots. It never establishes the town, locals, and most importantly the legend of Lavinia Morley the local witch legend. This is further confused by an ending that left me wondering what the point was. Spoilers ahead. Morley was using hypnotism to make the characters have bad dreams insinuating that none of the supernatural stuff happened. Why did he do this? Someone mentions as the house is burning down that he must have been mad. That is about as good as we get. Then the movie doubles down with the characters seeing Morley turn into Lavinia… so there was a witch? This ending was confusing and was a bad ending to a mediocre movie. Despite a stellar cast we spend most of the time with Manning and Eve. Now both are decent but when we have Steele, Lee, Gough, and Karloff in the cast I’d much rather be watching them. Gough is decent as a stuttering manservant to Lee’s Morley. He doesn’t get much screentime but what he does get is fun. Christopher Lee is honestly not very good in the role of Morley. Though I don’t think it was his fault as there is nothing in the story for him to sink his acting chops into. The character as written is a terrible villain as we don’t even know he is the cause until the last five minutes or so. Karloff is very frail and spends most of the movie in a wheelchair but damn is he good. He has a couple great monologues and there is a reoccurring gag about appreciating a fine brandy that had me cracking up. The guy does more acting with a look then most can do with pages of dialogue. He also gets to be the hero in the end, which was awesome. Karloff is the only reason to watch The Crimson Cult. Barbara Steele is wasted in what can be best described as a glorified cameo.

If you are a fan of Boris Karloff and haven’t seen The Crimson Cult, then you should. This is one of the best performances from the latter part of his career. In fact, it is my understanding that this was the last movie to come out while he was still alive. If that doesn’t interest you, I’d recommend skipping this one. Sadly, it was a missed opportunity to have a good time with some very well-known genre actors.

Posted by Gutmunchers Lives at 1:00 PM