note: This was from an article that I wrote for Grindhouse Purgatory a few years ago. It was not long after Larry Cohen passing away and I wanted to cover one of his movies for the report.

The Blu-Ray Report: The Stuff

I’m back with another Blu-Ray report. With the recent passing of Larry Cohen, I decided to pick the copy of The Stuff out of my to watch pile and take a look. I knew I wanted to do a Cohen flick but found my choices limited. I have many of his movies on DVD, but a decent Blu-Ray release can be hard to find. Many are just recycled DVD content on a new format. That is certainly not something that I wanted to cover here. But then I remembered The Stuff and I hadn’t seen it in years so that made my decision much easier. 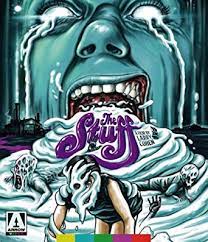 As always, I’ll first talk about the movie in case you haven’t seen it before, and then chat about the special features. By the end you should be able to decide if it is worth upgrading from your earlier release to the fancy new Blu-Ray. Along the way I’ll try to compare it to the media that I already had in my collection. In the past people have emailed me about different releases and while I do my best to find out what was already out there sometimes I miss things. If you should disagree with my article, please feel free to email me and let me know. I always leave my contact information at the end of these.

Let me give a brief synopsis of the movie. Things kick off with some men at work. One of them finds some odd white stuff bubbling up from the ground and immediately decides to taste it! Not something that I would do but to each their own. He finds that it tastes great and shares it with his friend. The scene shifts to sometime later where a cabal of ice cream moguls have hired a corporate spy, Mo Rutherford, to discover the secret formula of this crazy new dessert product The Stuff. While we know it is bubbling from the ground that is apparently a big secret. After some shenanigans Mo dives in to investigate.

Without giving too much away and spending too much time rehashing the plot we are introduced to a few other characters including a precocious kid, a love interest for Mo, a cookie mogul, and the leader of a local militia group which comes to the rescue. Yeah you heard that last part right. The ‘80s were a different time man… They all end up trying to warn the country that The Stuff is not good for you. I mean what kind of movie would we have if it was?

Larry Cohen was a master at making something out of nothing and he does it here again. The plot is very thin and forces the viewer to jump thru some serious hoops. The mental gymnastics include Mo stealing a kid away from his family without them calling the cops and a crazy militia oddball getting on the radio and telling everyone that the Stuff will kill them, and everyone immediately believes him! As a child of the ‘80s I can assure you we weren’t that gullible. I don’t consider these issues to be deal breakers as they add to the charm of the movie. Though I can imagine it annoying the heck out of some viewers, so I thought I’d mention it. 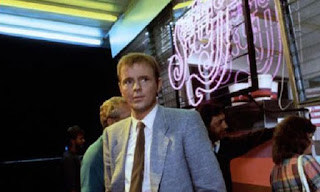 What Cohen does to help gloss over story issues is fill the movie up with interesting set pieces to distract you from the plot holes. We get a weird bit with a dog and one of the men who pushed the Stuff thru government testing. Then there are a couple random scenes with “Chocolate Chip” Charlie doing martial arts. The character is played by Garrett Morris and brings a lot of silly energy to the screen. It seems like every scene he is in has a punchline or a reason to pay attention to it. Overall the editing is tight and keeps the action coming at you rapidly. I suppose what I’m getting at is that you are so distracted with the movie that it isn’t until afterwards that you question what was going on. That takes a lot of skill to pull off and Cohen was a master.

Since The Stuff is basically a creature feature we have to talk about the special effects work. This isn’t the sort of movie that will have a lot of kills or gory bits. But we do get a giant gooey monster that slips in and out of people thru all their orifices. When it leaves you get a creepy hollowed out husk that we see a lot of on screen. This is done with some practical latex work and looks awesome. There is a scene near the end when an unexpected person “stuffs” out that is always a blast to watch. Mixed in with the practical effects are some green screen shots that honestly don’t hold up well. Some of them are quite bad actually. But overall for a low budget movie from the ‘80s I can’t complain too much about the work.

The Stuff isn’t anywhere near the best work that Cohen did. I’d say something like Q the Winged Serpent or Black Caesar are far better movies. But it does serve as a fun bit of monster movie goodness from a director/writer that always delivered the goods. If you haven’t seen the movie, I’d recommend you check it out.

So what of special features do we get? Here is where I was sort of surprised. Normally these Arrow releases are filled with all sorts of goodies. The Stuff Blu-Ray is awfully thin with a single documentary Can’t Get Enough of the Stuff: Making Larry Cohen’s Classic Creature Feature being the only new item on the disc. Though being 52 minutes long gave me some hope that there were some goodies to be had. Sadly, that wasn’t the case. We do get Cohen talking about the idea behind the movie and his take on consumerism. That was sort of interesting but much of the time is spent talking about his career in general. I was disappointed. 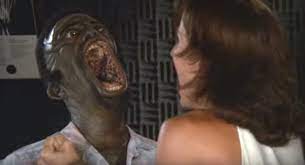 There are a few tidbits from Steve Neill, one of the effects guys, about creating some of the special effects including the great gag with Garrett Morris’ head in what might be the best scene of the movie. Also lead actress Andrea Marcovicci talks about working with Michael Moriarty and how he and Cohen kept changing the dialogue. The lack of interviews with Moriarty, Garrett Morris, and Paul Sorvino left me wanting more. Between this and the constant referencing of his entire career rather than The Stuff makes this a less than stellar extra. If you are interested in Cohen, you should check out the excellent documentary King Cohen.

Other than the trailer the only extra on the disc is a trailer commentary from director Darren Bousman. I think this is part of the Trailers from Hell series and is maybe 90 seconds long. Nothing really much to it.

The saving grace and the only reason to upgrade to this Blu-Ray is the picture and sound. I’ve mentioned more than once that I’m not the kind of guy that obsesses on this sort of thing. Even I can notice how much better the movie looks and sounds. This might backfire with some of the effects work, but for the most part is a welcome change from the grainy copies that I’ve seen in the past.

This is where I tell you if I think it is worth upgrading. This is a hard question for me to ask because I realized I didn’t own a copy of The Stuff before I bought this release. I had seen and rented it dozens of times, but never picked up a DVD or even a VHS. I’m glad to have this in my collection and will be revisiting it in October when horror movie season rolls around. Though if I had an old copy I don’t know if I would have felt that this was worth the extra money. Again, it looks and sound amazing, but the lack of good special features kills much of the appeal for me. In the end I suppose if you are willing to drop 30 bucks for picture and sound then this is certainly worth your hard-earned cash. Otherwise I’d stick with what you’ve got.

Well that is it for me. As always please feel free to email me at gutmunchers@gmail.com with any questions or comments on this article. I shall see all of you again here on the pages of this fine magazine in six months where I will again try to steer you towards or away from upgrading your movie collection.