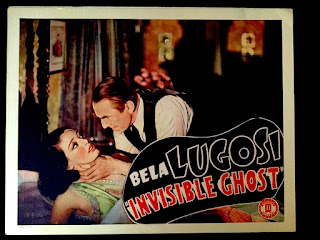 Bela Lugosi stars as Charles Kessler. When we first meet him he is having his butler setup his anniversary dinner with his wife. Only there isn’t anyone in the other chair! That seems… odd. It turns out that his wife abandoned him and his daughter a few years earlier leaving town with her lover. He hasn’t gotten over it and has this odd tradition every year on their anniversary. We also hear the household staff talking about the murders, so something is clearly afoot!

Kessler’s daughter, Virginia, has her fiancé over. Thru some dialogue we find out that they are madly in love but that he has some history with the family’s maid that threatens to throw a monkey wrench into their plans. Here is where things get weird. We also find out that the family gardener has the missing wife in his basement. Apparently, the night she ran off there was a car accident, and she was injured, losing her mind. He doesn’t want to break Charles’ heart by letting him see her that way, so he keeps her hidden. But she gets out and when her husband sees her he goes into a murderous trance. Damn he is the killer! None of this should be considered spoilers because we see it right away.

The rest of the story has to do with Charles killing the maid, the fiancé being blamed, him getting executed, and then his brother (played by the same actor) showing up to find out the truth to what happened. Eventually he goes catatonic and murderous in front of the police and the end credits roll. This is a weird movie.

Bela Lugosi made a lot of these poverty row studio films, which is a fancy way of saying low budget movies for small studios. A surprising number of them are good and this is one of them. While not perfect Invisible Ghost tells a simple story with a decent twist. It keeps the costs down with a limited cast and locations. The only actor of note is Lugosi, but he is excellent in the role. Things are way more interesting with him on screen and luckily that happens a lot in Invisible Ghost. His transition from loving father to murderous killer is done with a subtle change in his body language and works well. You can see his experience as a classical trained theater actor coming across in his performance. 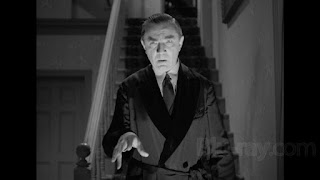 Lugosi gets a bad rap and is considered “hammy” by many modern horror fans. That isn’t at all fair as he was working during a time when the industry was still figuring out the difference between screen acting and stage acting. Many of his performances seem overblown because he was used to delivering dialogue so that the folks in the back row of the theater could hear them. He was also hindered by low budgets and admittedly terrible scripts. But he was a hell of an actor and if you give movies like Invisible Ghost a chance you will see that.

I suppose I will have to admit that despite all the positive stuff I’ve written above that this isn’t a perfect movie. I was a bit shocked when they killed off the fiancé as I thought for sure that saving him was going to be the plotline that drove the story to its conclusion. But other than that the rest of plot was predictable and of course they let us know who the killer is right away. Overall, this was a cheapie made to fill the second or third bill on a matinee showing and was there to kill an hour. It does that rather well, so it accomplished its goal. I did find it funny that there isn’t a ghost nor is anyone invisible. Maybe that is the big twist?  This is the Lugosi show and if you dig him then I recommend checking out Invisible Ghost.

Posted by Gutmunchers Lives at 2:40 PM