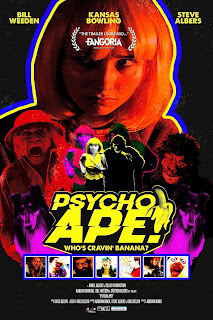 I’m late to the Psycho Ape game. Most all my friends have been telling me that I had to watch this, but it always got lost in the shuffle. When writer director Addison Binek got in touch with me and offered a screener I jumped at the chance. I honestly feel like a dummy for waiting.

Twenty-five years ago, an ape breaks out of the zoo and crashes a “teenage” party. He kills everyone except for Nancy Banana who he spares. Dr. Zoomis is called to the crime scene since he is a world-famous animal psychologist and starts pursing the Psycho Ape. Twenty-five years later he is still pursuing him when Psycho Ape decides to track down Nancy because he has a crush on her. Zoomis shows up and then the chase begins. No matter how many times he kills Zoomis he keeps coming back! All of this leads to New York City where sadly the Psycho Ape goes out Kong style.

I had expectations for this to be a fun but typical low budget movie that feel into the creature, slasher, or parody genres. But what I got was something else entirely. The narrative is a bit silly, but it works to connect a series of set pieces. There is a great gag of them being chased around the woods that I got a kick out of. We get several movie deaths referenced in the multiple ways that Zoomis gets killed off. When he uttered “clever girl” and “yippie kay yah” I was laughing my butt off.  There are horror classics referenced with a particular bathtub gag coming to mind. I could say more but I don’t want to spoil the fun.

There is a great scene involving a couple of actresses breaking character and talking about Ratatouille vs. Toy Story. They eventually ask the director and crew for their opinion before completing the scene where Psycho Ape kills them! Either Binek was creative enough to use something that happened naturally on set or even better yet he wrote it that way. Regardless this is genius and unlike anything that I’ve seen other low budget filmmakers do. It reminds me of the absurdist seventies romp The Kentucky Fried Movie in the way it plays with expectations. Another prime example of this is the Low Budget Film News that breaks in many times to update the viewer as to what is happening. Their motto is “We can’t afford to make this look good.”

The kills are done on the cheap and we get a lot of CGI blood spraying. Normally that annoys the hell out of me but with Psycho Ape! Binek leans into this. All the kills are banana related as that is the only weapon he uses. Necks gets slashed, couples get impaled, other are choked out, and many other cool gags I won’t spoil. If you can’t afford top notch effects then go super silly, which is what they did here, and it works perfectly.

If the above isn’t enough to get your attention, then here are a few more tidbits. It is shot in the style of an old shot on video flick. You get some groovy Laugh in Style dance transitions. Obligatory Shawshank Redemption parody. We also get to enjoy some true gorilla filmmaking as the people going about their day in New York City have no idea what is going on. My inner Larry Cohen fan was digging that so much.

Not only is this one of the best independent movies I’ve seen in many years, but it is also made me laugh more than I have in a very long time. I love Psycho Ape! Hell, I was worried that they were going to kill the puppy… but they don’t! I’m sure that I missed something in my enthusiasm and if I did, I apologize Find yourself a copy of this one my friends. Binek is a filmmaker we should all be supporting.

Posted by Gutmunchers Lives at 2:20 PM