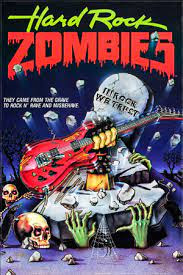 This is a movie that I passed up in the aisles of my Mom and Pop VHS store many times. It had great box art but something about the pictures on the back gave me the feeling that the art was all that it had going for it. More than three decades later I finally decided to bite the bullet and spend a couple of hours seeing if I made a good decision all those years ago.

The movie kicks off with a couple dudes in a convertible picking up a pretty hitchhiker. They stop at a nearby pond and go skinny dipping. While this is happening, a weird dude is taking pictures while a couple of little people are running around. Wait… HOLY SHIT that is Phil Fondacaro! Okay now I’m a bit more interested. The hitchhiker kills the guys and then the action shifts to a band playing a show. After the show is over their manager sets them up with some groupies to take pictures showing they are living the rock-n-roll lifestyle. Everyone except for the lead singer who seems above it all. He meets a girl named Cassie who warns him to skip the next town/show they are playing. Seems the town of Grand Guignol isn’t too friendly.

Of course, they ignore her warning. While on the way into town they meet the hitchhiker, and she takes them home to meet the rest of her weird family. They also head into town long enough to piss off the super conservative locals with their badassery… I guess. They get tossed in jail aka. a barn but get sprung only to go back to the hitchhiker’s family home where they get murdered by the various family members. Before that though Jessie, the lead singer, gives Cassie a copy of a tape where he plays a song that he has figured out will raise the dead. Why? Reasons, I guess! Okay to be fair they were being chased by a killer. She plays it and they come back to life to get some revenge on those who murdered them. Unfortunately, everyone they kill becomes a zombie and kill more folks who also become zombies. We have an outbreak situation here. 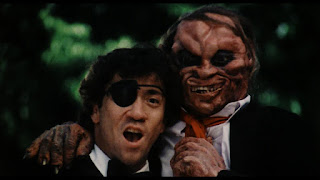 Is that enough plot for you? Don’t worry there is more. The hitchhiker and her murderous family are hiding a big secret. They are all Nazis and Grandpa is Hitler, while Grandma is Eva Braun. And for some inexplicable reason she is also a switchblade wielding werewolf as well. After killing the band Grandpa Hitler decides he is done hiding and fires up the gas chamber again. I kid you not. They take the time to explain this on a tour with the bands manager who he is trying to recruit. Zombie Hitler and zombie werewolf Eva Braun… and yet the movie still sucks.

Originally conceived as a twenty-minute short to be used within another movie Hard Rock Zombies feels stretched out beyond the material. The pacing is terrible as I don’t think they had much more than some ideas they thought would be funny and tossed them together. This leads to horrible pacing as the movie spends way too much time on not one, not two, but three extended mini concerts. The music isn’t horrible, but I just wasn’t’ interested. In case you are wondering it is more pop than hard rock. They also decided to include and extended gag with a town hall meeting to ban rock and roll followed by them smashing records. Let me reinforce that the town has nothing to do with the main story of the band and Hitler’s extended family. See what I mean when I say they just tossed a bunch of shit together? 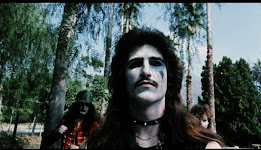 Now this next part is going to make me sound a bit… sensitive I guess is the right word. I like a tasteless joke as much as the next guy but almost all of the comedy in Hard Rock Zombies comes from them trying to milk the whole Hitler is alive and then a zombie thing. They are even poking fun at the holocaust a bit with the oven and gas chamber gag. Maybe if that was a one off tossed in to shock and then moved on from it might have worked. But the filmmakers keep going back to that well until it gets somewhat uncomfortable and certainly not funny. In the end none of the attempted humor landed with me which only made the movie even more tedious.

There are a bunch of kills that are okay and clearly done on a low budget. A head gets ripped off, a spike is driven thru a throat, and someone dies by weed whacker. The best gag has to be one of the zombies eating itself. Why did it do this? I guess for the laughs. Speaking of the zombies there is zero gut munching or over the top gore. The design of the undead is very basic and we don’t see a single elaborate makeup job.

Hard Rock Zombies fails as a zombie movie. It also fails as a comedy, which the filmmakers billed it as. The pacing is awful, nothing much happens that is slightly interesting or memorable. This one is a chore to get thru. Why the hell is this movie an hour and thirty-eight minutes long? But Phil Fondacaro is in it so we have that. Really don’t waste your time on this garbage. There are way better ways to waste your time.

Posted by Gutmunchers Lives at 9:24 AM