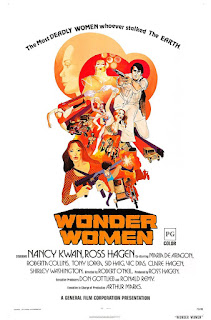 It has been a while since I got my drive-in movie mojo going here at the site, so I thought since I’m taking a break from my most recent marathon I’d get back to the good stuff. This flick starts off with some topless ladies swimming and then doing karate. This feeds into a montage of them kidnapping world class athletes and smuggling them to an island where the dreaded Dr. Tsu uses them as spare parts to fix what ails her wealthy clients. Need a set of eyes or maybe some new legs… she has what you need… for a price!

One of her most recent acquisitions is a Jai Lai player who is insured by Lloyds of London for a cool half a million. The company brings our hero Mike in on the recovery, and he starts to unravel what is going on. This is with the help of his side kick Lapu-Lapu, played by Vic Diaz. When the local mob run by Won Ton Charlie fails to kill him on Tsu’s orders, she sends one of her lady assassins after him. But old Mike is way too sexy for her and eventually she leads him to the hidden island where there is a big showdown. Much Kung-Fu is done, bullets are shot, and the requisite basement of freaks is released to go on a killing rampage. That is about all one could ask from a movie shot in the Philippines.

Let me preface my review with the following. This is not a great movie. The actions sequences are silly, the acting is a bit wooden, and the story is goofy. Objectively there is no reason that I should have loved this as much as I did. But I love these shot in the Philippines flicks so much. They have a certain charm where the filmmakers just go for it, regardless of if they have the budget or a cohesive story to tell. Here the story is straightforward and simple in that sort of men’s magazine two fisted adventure style. The ladies are lovely, bed the fellas, and can’t resist their utter manliness leading to them betraying their bosses. Totally cheesy in that awesome drive-in “B” movie fashion that puts a smile on my face. There is always something interesting on screen and I was never bored by it.

The cast has a lot of familiar faces that worked in the Philippines. I’ve already mentioned Vic Diaz, who was a legend and appeared is so many great movies. Here he has a decent part and gets to play second fiddle to our hero. Mike is played by Ross Hagen, who did quite a few flicks overseas and was a solid actor in “B” movies. Nancy Kwan is great as the deadly Dr. Tsu. I also recognize at least one of the lady assassins from the Women in Prison flicks made around the same time. Though my favorite is an unexpected appearance by the legendary Sid Haig as Gregorious, Dr. Tsu’s business partner, That dude can pull a ruffled shirt off like no other.

We also get some generic monsters that sort of play a part in the end, as well as some spare organs floating in jars. But this isn’t one of those that is going to lean heavily into the horrific aspects of things. Again, it is more about the action sequences, including a car chase where lots of crazy shit happens, including a great stunt with a guy getting hit by one of the cars. Only this wasn’t a stunt as they didn’t close or control the streets as they were shooting. The folks running away from the taxis weren’t acting and neither was the guy who got hit by the car! Now that is guerilla filmmaking.

I had a blast with Wonder Women and highly recommend anyone that is into these actors or the drive-in movies of the seventies to track themselves down a copy. I guarantee you will have fun with it.