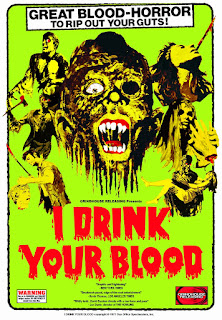 How have I never reviewed my favorite drive-in movie for the site? I Drink Your Blood checks all the cheesy boxes for a good time. What are those boxes you might ask? Well, I’m happy to share with you.

The movie takes place in a small town that is dying. Almost everyone has left except for a woman who runs a local bakery, a grandfather, and his grandkids as well as the workers at a nearby jobsite. The bakery is only open to help feed the men working and living nearby. To this scene comes some groovy hippy/satanists lead by their charismatic leader Horace Bones. When we first see the group, they are naked and performing a ritual involving a chicken. A local girl, Sylvia, is spying on them. They catch her and it is implied that she is assaulted in the most heinous of ways. The next time we see her she is nearly comatose and wandering into town.

Eventually Grandpa finds out what happened to her and goes to get some payback or maybe just scare them off with his shotgun. They overpower him and force some LSD into the old guy. He makes his way home and now the younger brother is down to get some payback. Pete has worked with his grandpa, who is a vet. So, he knows to kill a rabid dog and then inject some meat pies with its blood. They feed them to the hippies and then you get a bunch of homicidal, bloodthirsty, hydrophobic, crazy people running around. One particular lady from the group gets really friendly with the workers at the job site and you can add them to the problem. Things get bloody before the movie ends on a bit of a vague but satisfying conclusion.

I’ve always loved I Drink Your Blood and consider it a perfect example of what made these low budget drive-in movies awesome. The story is fast paced and easy to follow. You have some weirdo hippies show up. They do crazy stuff like the infamous rat hunt (not for the squeamish) so that you know right away there is something very wrong with them. There is the hint of rape, which sets up the revenge part of the movie. The acting is already over the top but once the characters get rabid it goes even crazier. Folks are chased around with swords, hatchets, and yes severed heads. No one is safe from the disease as it is spread with a single bite or any other exchange of bodily fluids. Of course, that explains the sleaziest part of the flick where the one lady gets naked and the fellas at the work site take turns. As you can see the movie leans into over-the-top exploitation. That is exactly what I want in a flick like this.

For a movie made in nineteen seventy the gore is damn explicit as the blood flows freely. We get a gruesome stabbing followed by amputation. Some guts hit the floor, a nice lady loses her hand, a strangling, another rabid hippy torches themselves, a shotgun to the face, and a sword comes poking out of a mouth. Though my favorite must be the pregnant lady realizing her baby is doomed and taking a handy wooden stake to her uterus. The blood is very theatrical and bright red, but that only adds to the charm. Think an H.G. Lewis flick with just a bit less restraint! Heck I didn’t even mention what we thought would be the heroic lead losing his head and having it carried tossed around for the last few scenes.

All of this winds up with a vague ending where you think that one of our survivors and the love interest of the surviving male lead is probably infected. Also Pete is seen wandering off aimlessly into a field. What does that mean? Maybe he is toast as well? Normally I’m not a fan of this sort of thing but here it works. If you haven’t seen I Drink Your Blood before do yourself a favor and track down a copy. This is at the very beginning of the golden era of low budget over the top decade of the seventies and because of that is a must see. I love this movie!

Posted by Gutmunchers Lives at 1:22 PM