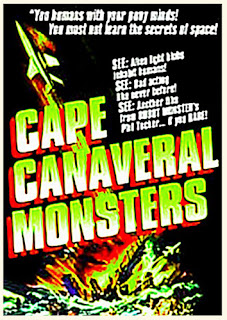 I pride myself on having watched most of the horrible movies put out in the fifties and early sixties, but The Cape Canaveral Monsters eluded me. Hell, I never even knew it existed until my friend Pete was talking about it. He hooked me up with a copy and of course I dove in at the first opportunity.

There are aliens trying to sabotage the U.S. space program by shooting at the rockets with a special ray gun. They can’t survivor or at least interact with our world, so they inhabit the dead bodies of a couple they killed in a car accident. We also find out that they freeze humans to transport back to their home world for study, but that process is difficult, and many are destroyed by the process. Sounds good so far… right? Well don’t get your hopes up.

Sally is the niece of the German scientist that is running the rocket program and she has eyes for a mathematician named Tom. But Herr scientist doesn’t like the idea of his niece dating someone working on the project, so the pair sneak off with another couple, Bob and Shirley. They run into the aliens, one of whom has an arm that won’t stay on his stolen body. This is important later. Some science stuff happens, then some alien stuff. Eventually Bob is used for spare parts (the arm) and Sally is frozen for transport. Tom and Sally also get caught but are rescued by the army and then some stuff happens with explosives and the world is saved.

This movie is only an hour long and it was a slog to get thru. The story is paper thin, and I never understood the shifting motivations of our invading aliens. They act like it is a big deal for them to travel, but then just pop home for a consultation. They are super smart, but don’t understand that the radium on our watch faces (used to be a thing) is the super precious material that they use to unlock and turn stuff on and off. How am I supposed to be scared of aliens that don’t even do the tiniest amount of prep work? The humans aren’t much smarter as our characters keep walking into traps and do the dumbest things. If they had a script here it wasn’t thought out at all.

The pacing also is terrible. The movie is filled with stock footage of rockets and guard shacks because why spend money to shoot anything when you can get it for free. When we do get new footage a great deal of it are various characters walking around here and there aimlessly. But I’d rather watch that then the cast try to stumble thru their dialogue. Are you beginning to catch onto how bad that this one is?

I will give the movie some credit for a couple of gags with the severed arm. They have the actor tuck it behind him while another hidden actor sticks his arm out of a window. This as well as a couple other tricks worked decently enough to get my attention. Sadly, it is lost in an otherwise mess of a movie.

Probably no surprise here but I’m not recommend you spend your time or money on The Cape Canaveral Monsters. This may be the worst of the fifties science fiction movies that I’ve sat thru and trust me there have been some real turkeys.