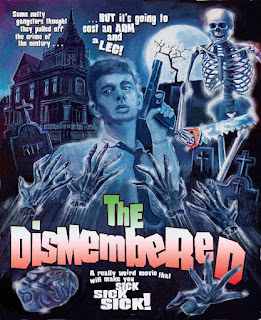 I’m a sucker for regional filmmakers and their product. When I heard that The Dismembered was released for a short theatrical run and then disappeared for fifty-five years until being released on DVD I was intrigued. It was either going to be a lost gem or a dumpster fire. So, what was it? Time to take a look.

Our main characters are some safe crackers robbing a wealthy house while the maid is tied up and gagged. They are posing as ambulance drivers, which is how they make their escape with a police escort no less! Eventually after ditching their ride they make it to an isolated house to lay low until the heat is off. Unfortunately for them the house is haunted by some elderly, quirky, and homicidal ghosts. There is also another ghost who is attached to a locket they stole, which further complicates things. After a committee meeting the ghosts decide to kill them all. But before they can finish them all off the spirits from the nearby cemetery invade the house in the form of arms, hands, and feet. This one gets weird before wrapping up.

There was something about The Dismembered when I was watching it that bugged me. It was played as a comedy with some weirdly dark twists. People are silly and then murderous, all while a jazzy soundtrack plays in the background. Then it hit me all of a sudden. This is a low rent take on the Corman movies A Bucket of Blood and Little Shop of Horrors. Not so much in that the story is similar but more that the spirit and I suppose “feel” matches up. Sadly, while those movies are a couple of favorites this one misses the mark.

The pacing is off with bursts of maniacal energy followed by slow talky parts. This makes for what feels like a very long movie that in reality barely makes it to an hour runtime. The living characters aren’t terribly interesting and sort of blend together. The ghosts, who I think were supposed to be the focus, have no background or history. They just sort of are to be wacky and incompetent. They never explain why the neighbors aka. the rubber body parts attack the house. This if further complicated by the girl ghost who seems to be there to be pretty and then disappear when not needed.

Honestly, I don’t think that they had much of a script and were winging it. What sealed the deal for me is when we got an extended slapstick gag with the ghosts running around doing “battle” with the invaders. The ending also left a lot to be desired as after sticking thru this we don’t really find out what happens to the survivor. At least not on screen, it is only hinted at.

The sound is terrible with loud and intrusive music that is that generic sounding late fifties beatnik jazz. This is done in some scenes to cover the fact that they didn’t record audio. Here is a pro tip when watching old movies. If the cast always has their back to you when delivering lines that was because they dubbed it all in later. With the lack of ambient noise and the obnoxious music that was clearly the case here. I had hoped that it would get better, but even when they were recording audio the music is annoying and the audio isn’t great. The folks making this movie clearly didn’t have the gear or skills to do it correctly.

I could go on about the terrible acting, poor dialogue (again it feels improvised as if they didn’t have a fleshed-out script), and awful lighting. But haven’t I made my point yet? There is a reason that The Dismembered spent more than fifty years on a shelf. Maybe it should have stayed there. I can’t recommend this one.