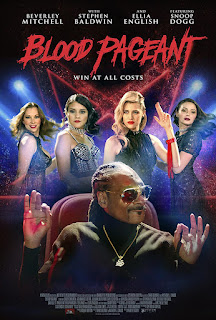 A voiceover about something that I don’t remember and didn’t care about drones on as the camera zooms in on planet Earth and drops right down until it focuses in on the face of a girl who screams as the camera goes black. Then we see the message appear on screen… “Six Days Earlier”. The girl we saw is named Amy and she is going to see a medium for a card reading. She is worried that she “can’t go thru with it” which we find out later the “it” is going on a reality show. She is given a pendant and told to make a spirit board. Of course, that isn’t a good thing as somehow things get out of hand and a curse in the form of a mysterious figure in a black dress starts to kill people.

We are also introduced to another girl on the show, called American Dreams. She is a devout Christian and struggles with the content of the show. But Shelley can’t just quit when she recognizes the danger that everyone else is in. So she enlists the help of god by going to a church. There she meets a priest, played by Stephen Baldwin in a glorified cameo, who gives her some holy water and an old bible. This leads to a big battle where basically everyone, but our heroines die. But at least the evil is stopped…

This is a terrible movie. The cast is passable but nothing special. Things are dominated by the appearance of the previously mentioned Baldwin as well as Snoop Dogg and Ted Lange. These are basically small cameos with Snoop mostly showing up on a cell phone. Yes, he literally “phones” it in! The story doesn’t help as it gives nothing interesting for the actors to sink their teeth into. This is a very basic story that has a “been there done that” feel. It was mind-numbingly boring. It spends far too much time on backstory for characters that don’t move the story along and honestly that as a viewer I couldn’t care less about. This movie clocks in at almost two hours and desperately needs a bit of editing. Though I’m not sure if that would help at all.

If it isn’t obvious yet I’m not recommending Blood Pageant. It is a misfire that no one needs to waste their time watching. I’ve seen a lot of crap while digging thru the stacks of flicks to watch for the site and this has to be one of the worst I’ve seen. Make me feel better for having watched this and heed my advice.

Posted by Gutmunchers Lives at 4:20 PM